(Clearwisdom.net) Chen Zhenggao, Governor of Liaoning Province, China, was sued for genocide for his role in the persecution of Falun Gong in China during his current visit to Taiwan. When Chen arrived at the Hilton Hotel in Hsinchu at midnight on February 18, he was greeted by Falun Gong practitioners’ banners. 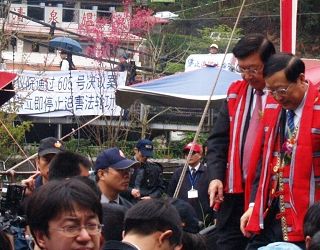 Chen (right), and a banner which reads “US Congress Passed Resolution 605 to Call for Immediate End to the Persecution of Falun Gong”

On the morning of February 19, around 7 a.m., practitioners returned to the hotel to continue their protest of Chen’s visit to Taiwan. They displayed banners which read “Chen Zhenggao: A Criminal Lawsuit Was Filed Against You for Your Role in the Persecution of Falun Gong,” “Persecution of Truthfulness-Compassion-Forbearance Can Not Be Tolerated,” “Falun Dafa Is Good.” Around 9 a.m., members of Chen’s delegation left the hotel in limousines. Then a police official asked practitioners to move to a side road. The practitioners continued to display the banners on this small road. Unexpectedly, Chen exited a side door facing this road and thus saw all the banners clearly.

Though it was raining quite hard, many practitioners protested at several spots along Chen’s tour route. When Chen got closer, they all shouted: “Falun Dafa is good!” and “End the persecution of Falun Gong!”

When Chen attended a donation ceremony, practitioners displayed huge banners behind the ceremony stage. Many local residents are native Taiwanese, and they came to the ceremony because of a gift option. When they learned about Chen’s background, they were shocked.

On the afternoon of February 19, Chen attended a contract signing ceremony in a fruit and vegetable wholesale market in Taizhong. Local practitioners protested outside the market. Chen seemed very nervous, frequently rubbed his hands and looked outside, where a huge banner displayed: “Chen Zhengao: A Criminal Lawsuit Was Filed Against You for Your Role in the Persecution of Falun Gong.”

After the contract signing ceremony, Chen went to Yuyuan Garden Hotel, where he met Falun Gong practitioners again. While walking toward the hotel entrance, practitioners shouted: “Chen Zhengao: A lawsuit against you has been filed. End the persecution of Falun Gong!” Many passersby rolled down their car windows and gave a thumbs-up: “Go Falun Gong!”

Regarding the fact that many visiting Chinese Communist Party officials are culprits of the persecution of Falun Gong, the Taiwan Legislative Yuan and 12 county/city councils have passed resolutions: No invitations, no welcoming, no hospitality to human rights offenders.

Taizhong city councilman Li Tianshen will initiate a similar resolution, and he protested the city government’s treatment of the Chen delegation. He said: “Why does the city government spend taxpayers' money to welcome such a human rights abuser. I will raise this issue in city council and require the mayor to explain.”

According to statistics on Clearwisdom.net, as of February 2011, 409 practitioners have been persecuted to death in Liaoning Province. According to the Coalition to Investigate the Persecution of Falun Gong, Chen has been one of the primary 610 Office leaders in the province for the past 12 years.

“Admiration for and Gratitude towards Mr. Li Hongzhi from People in China (Images)”