(Clearwisdom.net) January 27, 2011, was a day of low temperatures and a strong north wind in Helsinki, the capital of Finland. Braving the bitter cold, the Falun Gong practitioners in Finland held a candlelight vigil in front of the most popular city centre shopping mall, Stockman, to mourn those Falun Gong practitioners who were persecuted to death in China. They also told the public the facts about Falun Gong. Many people who learned and understood the truth signed in support of an end to the persecution. 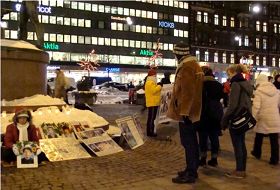 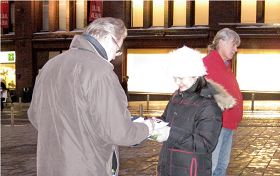 Many who learned the truth added their names in support of an end to the persecution.

At 3:00 in the afternoon, the practitioners in Triangle Square put up banners, set up exhibition panels exposing the different tortures the Chinese Communist Party (CCP) uses to persecute Falun Gong practitioners, and played the music "Candlelight" and "Please Sit Beside Me.” The people hurrying by were shocked by what they saw and stopped to ask for details. Having understood the truth, they signed the petition calling for an end to the persecution. Most of them said that they would tell their family members and friends about the persecution of Falun Gong

After seeing the practitioners putting up the banners, Mikael, who looked to be in his in 60s, said, “I have just returned from Guangzhou, China, via Hong Kong, where I also saw banners like yours. You are doing well! You are really doing well!” As soon as he learned that he could sign to show his support for an end to the persecution, he added his name at once. Before leaving, he did not forget to give the practitioners a “thumbs up.”

Anne-Maria is a website designer. After seeing the panels exposing the different types of torture, she said that she could not understand why the CCP would persecute Falun Gong. She kept shaking her head after hearing that there was no freedom of belief in China and that Falun Gong practitioners were deprived of their lives by the CCP only for their belief in Truthfulness-Compassion-Forbearance. She said that the practitioners were doing a good thing, gave them her best wishes, and asked them to keep it up.

"It is such a big thing. Why have our media and the international media had so few reports on this? You should ask the media to help tell the news to more people.” A lady, after seeing the panels, said to the practitioners, “More people should be paying attention to this matter.”

A company manager, Jani, and his partner stopped to read the panels for a long time. A practitioner gave them an informational leaflet and told them about the persecution taking place in China. Jani said that he had lived in China for five years and knew how tightly news was restricted there and that, even if he lived in China now, he would hardly know what was truly going on. He and his partner signed their names to the petition.

It was an exceptionally cold day in Helsinki. During the three-hour event, the Falun Gong practitioners sat quietly in front of the lit candles from beginning to end. Their peace and perseverance greatly moved the people passing by.

Seeing them standing and holding the banners in the cold, an elderly woman was so moved that she gave all the drinks she was carrying to the two female practitioners to show them her support.

Many Chinese tourists also stopped to watch. They were shocked when they read the panels exposing the methods of torture. One lady said she had never heard about any of it. She took picture after picture with her camera and said she would take them all back to China.