(Clearwisdom.net) Liaoning Province governor Chen Zhenggao, a documented human rights villain, arrived in Taiwan at 11 p.m., on February 15, 2011. When he left airport customs after a one-hour delay, almost 60 Falun Gong practitioners met him and told him, “Chen Zhenggao, you have been served with criminal charges. Stop persecuting Falun Gong!” Chen is the seventh Chinese Communist Party (CCP) high official sued in Taiwan for genocide. Taiwanese Falun Dafa Association Chair Zhang Qingxi (张清溪) met with the Internal Procurator of the Higher Procuratorate on the morning of February 15, and requested the arrest of Chen Zhenggao. 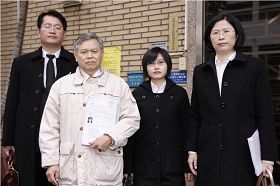 The Taiwanese Falun Dafa Association filed a lawsuit against Chen Zhenggao, for crimes of genocide and violation of the International Human Rights Convention.

The “welcome” group, organized to greet Chen Zhenggao and his delegation, heard that Chen had been sued, and quickly left. The Chinese delegation hurried to their tour bus, leaving their bouquets of flowers on the ground. Police officers on the bus shouted to the driver, “Shut the door quickly! Drive off now!” The whole process took less than five minutes. Others waiting outside the customs office laughed, “Are they refugees?”

Falun Gong practitioners held banners at the airport as CCP official Chen Zhenggao arrived in Taiwan, to protest his involvement in the persecution of Falun Gong

The Taiwanese Legislative Yuan and twelve local councils have passed resolutions banning the entry of Chinese human rights violators into Taiwan. Half a month before Chen Zhenggao visited Taiwan, the Office of Legislator Chen Tingfei and the Taiwanese Falun Dafa Association submitted a list of names of over ten thousand Chinese officials actively involved in the persecution of Falun Gong to the Immigration Bureau, the Mainland China Committee, and the Legal Service Ministry.

Ms. Zhu Wanqi (朱婉琪), speaker for the Falun Gong legal group pointed out, “Chen Zhenggao has had complete involvement in twelve years of persecution of Falun Gong. Just as Hitler's army generals and main officials, after World War II, were held responsible for the genocide of the Jewish people, we believe that all suppressed people in China eagerly hope that the free and democratic Taiwan can bring these murderers and torturers to justice. We hope that all Chinese can encourage the Taiwan government to do well.”

According to reports from the World Organization to Investigate the Persecution of Falun Gong (WOIPF) and the Minghui website (Chinese version of Clearwisdom), Liaoning Province is one of the provinces where Falun Gong practitioners are most severely persecuted. Based on incomplete statistics, as of February 2011, 409 practitioners have died as a result of the persecution in Liaoning Province.

“Family of Dentists Subjected to Persecution”