(Clearwisdom.net) The annual Chinese New Year Parade was held on February 12, 2011, in Flushing, Queens, New York. Crowds of people packed the streets for the festive celebration. The Falun Gong contingent was warmly welcome with its variety of sections in the parade procession. However, about an hour through the parade, a Chinese man violently intruded into the Falun Gong contingent. Police arrested him on the spot and took him to the police station. 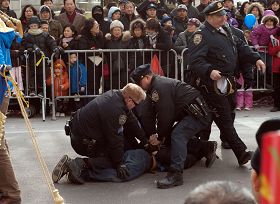 Police arrest a Chinese man who jumped a police barricade and threw himself at the Falun Gong practitioners, breaking a pole of their banner, during the Chinese New Year parade on February 12 in Flushing, Queens. Three police officers immediately rushed to subdue and arrest him.

According to eyewitness Mr. Dong, around noon at the intersection of Sanford Avenue and Main Street, a Chinese man in the crowd charged the Falun Gong parade procession. He threw himself at one of the banners, breaking the banner pole in two, before three police officers rushed in to subdue and arrest him. He was handcuffed and taken to the Flushing Police Station Precinct 109 in a police vehicle.

According to Mr. Dong, the man was about 27 years old and 1.7 m (5ft 7in) tall. He wore glasses, a short black jacket, jeans, Nike sneakers, and was carrying a black backpack.

Another eyewitness, Mr. Fei, believes that the attack was instigated by someone behind-the-scenes. When the attack took place, a man dressed in black wearing dark sunglasses rushed into the middle of the road and took photos. Mr. Fei believed that the incident was a provocative act planned by CCP agents. The CCP attempts to create a false impression that Falun Gong “stands against” the general public.

Falun Gong contingent co-ordinator Ms. Yi said as a legitimate part of the community, Falun Gong practitioners are under the protection of the American law. This man should be aware that in America, a free country, not a one-party state like China, he cannot do whatever CCP agents instruct him to do here. Anyone attacking another will meet with justice in the courts.

A Falun Gong representative, Mr. Yang Sen, said that these people don't understand that serving the CCP will not have good results. When you are in trouble, the CCP will stay away, and will do nothing to help you. Zheng Jiming and Wong Yujun who beat Falun Gong pracitioners on September 7, 2001 in front of the Chinese Consulate in Chicago were found guilty and fined. Lei Guoming who insulted Falun Gong practitioners on July 13, 2001 in front of the Chinese Consulate in Chicago died of a sudden and serious illness one year after the incident. These people actually harm themselves.

Regarding the disruption, a police officer from the Flushing Police Station Precinct 109 responded, “ No tolerance.”