(Clearwisdom.net) Mr. Han Qingcai, 62, was the former Political Section Chief of the Liaozhong County Police Department in Liaoning Province. In 2001, he went to Beijing to appeal to the government for the right to practice Falun Gong and was arrested and sentenced to four years in prison. In the Liaozhong County Prison, he was persecuted almost to death before being released on August 8, 2003. He died eleven days later on August 19. 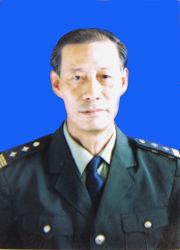 Mr. Han Qingcai before his death

On evening of December 7, 2001, nine practitioners in Liaozhong County took the train to Beijing to appeal for Falun Gong. They were surrounded by the police midway to Beijing and were taken to the county public security office. Mr. Han and other practitioners were able to get away, but his wife, Ms. Liu Yuying, and others were taken to the Shenxing Brainwashing Center.

Police officer Qin Mengzhi and several dozen officers from the Liaozhong Public Security Division broke into Mr. Han's home and ransacked it. They broke the lock on the door to get in and turned everything upside down. When they couldn't find Mr. Han, they went to harass his eldest son, Mr. Han Cheng, in an attempt to force him to tell them the whereabouts of his father. When Han Cheng did not tell them where his father was, the police threatened him, causing great mental distress, and he died on March 28, 2007. The police went to the home of Han Qingcai's relative in the countryside to look for him. They searched without providing any legal documents. The police even claimed that they were friends of Mr. Han.

The police kept surveillance on Han Qingcai's home and monitored the family's phone. His relatives and friends were implicated. After ten days, the police captured Mr. Han and took him to the Shenxing Brainwashing Center that very evening. The guards ordered other prisoners to watch him. They searched him thoroughly and kept him under surveillance even when he ate, slept, or used the bathroom. In order to force him and his wife to give up practicing Falun Gong, they sent them to the Zhangshi Correctional Center to brainwash them. They were forced to pay four hundred yuan per day in living expenses. The guards tortured the practitioners by depriving them of sleep for days and nights at a time. Nevertheless, they were unable to shake the couple's confidence and determination to practice. After two months, they were released, only after paying five thousand yuan in cash each.

But the persecution did not stop. Just two months after they returned home, police officer Wei Yunbai and several others arrested Mr. Han on the evening of April 6, 2002, and took him to the Liaozhong County Detention Center without a warrant. They deprived him of any personal freedom and denied him family visits. Mr. Han was then sentenced to four years in prison at the end of June 2002. He was also dismissed from public employment.

Later, the Liaozhong Detention Center called his family to tell them that Mr Han wasn't eating, and his health had become very poor. When his family saw him, they were shocked. He was very weak and pale, spoke feebly, and was barely able to walk. They couldn’t even bear to look at him. At that time, two judges arrived and said angrily, “Han Qingcai has a bad attitude, and he has been sentenced to four years in prison.” After examining him in a hospital, the doctor in charge wanted to keep him in the hospital, but detention center officials opposed his decision. They finally agreed only after some persuasion from the hospital, but he had to report to the detention center every day. They sent two police officers to take turns watching him. Under such conditions, Mr. Han's health worsened and, after just one month, he couldn't even get out of bed. Even so, the authorities did not let up on the persecution. Only when they saw that he was dying did they let him go home. A few days later, Mr. Han Qingcai passed away at home on August 19, 2003.

This good person, who insisted on upholding the truth and cultivating Truthfulness-Compassion-Forbearance, was persecuted to death by the CCP.

“The Bitter Experiences of Mr. Wu Sanbai's Family from Xingtai”