Without the Attachment to Reputation and Profit, I Am No Longer Depressed (Photo)

(Clearwisdom.net) Many people nowadays are stressed as a result of their heavy workloads. They do not eat or sleep well, are easily agitated, and their families are affected by their struggles. It is as though they are living with a time bomb. They suffer a great deal, becoming exhausted physically and mentally. Mr. Zeng is such an example. Luckily, he found Falun Dafa and his entire life has changed. 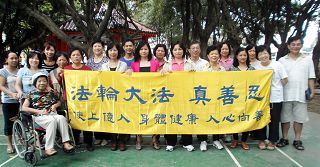 Mr. Zeng (wearing glasses in the back) left his depressed life behind after he learned Dafa and now lives a meaningful life.

Time of Depression Becomes an Opportunity to Obtain Dafa

Mr. Zeng works at the Taiwan Zhongshan Scientific Institute. Two years ago, his investments failed. The heavy pressure from work and his strained relationship with his family caused him to experience insomnia and depression, and he was eventually hospitalized.

One morning he walked to a park near his home and was attracted by the sound of beautiful music. He was hearing the Falun Dafa morning exercise group. He stood close by and watched for a while. A practitioner walked up to him, and that was when he began practicing Falun Dafa.

Mr. Zeng attended a nine-day Fa lecture series to learn Falun Dafa about seven years ago. He remembered watching the video of Teacher Li Hongzhi’s lectures and feeling that Teacher Li was very unselfish, and that Teacher’s explanation of the Fa was very clear. However, perhaps because the timing was not right, he did not begin his cultivation then. Now, looking back, he feels that everything was prearranged. The low point in his life turned out to be an important turning point for him.

Mr. Zeng went through the nine-day Fa lecture series a second time. He deeply appreciated something Teacher Li said in the final lecture: “It’s hard to endure, but you can endure it. It’s hard to do, but you can do it.” (Zhuan Falun) As long as one perseveres, one will find that the many difficulties one faces will seem like nothing when looked back upon. He applied this principle to his work, and things were no longer as difficult.

Learning to Look Inward, His Relationship with His Family Improved

Mr. Zeng’s depression diminished gradually. When faced with problems, he would first calm down, as opposed to dealing with things emotionally as he had done before. The strained relationship between him and his wife and children improved. Now when his wife says something inappropriate to him, he thinks of Teacher Li’s lesson of “looking inward” first. He evaluates whether or not the words he says or the things he does might be offensive to his wife. As a result, he has become more tolerant of his wife’s emotions.

In the past, when his children would ask him for help with their homework, he would say rather impatiently, “Didn’t I explain it to you before?” Now he is more patient. The changes in him are obvious to his family. Although his wife is cultivating in another religion, she is very supportive of his cultivation in Falun Dafa.

Benefiting from Dafa and Clarifying the Truth

Mr. Zeng found pleasure in regaining his life. He gradually realized that practitioners are devoted to clarifying the facts about Falun Dafa to people because they do not want to see innocent people deceived by the lies of the Chinese Communist Party (CCP) and misunderstand Falun Dafa as a result. He truly hopes that people will come to know that “Falun Dafa is good” and have a good future.

Mr. Zeng gathered up his courage and began to tell his colleagues and superiors the facts about Falun Dafa and the persecution in China. He exposed the persecution, including information about the extraction of practitioners' organs by the CCP. At first he didn't speak very well, but he gradually became better and better. He also participated in the parade in Taiwan, celebrating the 100 million people who had quit the CCP and its affiliations.

Mr. Zeng’s workplace has a relaxed atmosphere. He can do the Falun Dafa exercises with his colleagues during lunch breaks. He is a technical staff person, and he feels that Teacher Li’s talks are very logical and clear. However, if one restricts oneself to seeing only the technical point of view, then one will be confined.

Before he cultivated, part of his pressure at work came from his yearning for a promotion, which affected his health. From the Fa, he came to understand that he will not lose things that belong to him, and he will not get things that do not belong to him. He no longer attempts to evade difficulties at work because he knows that by facing and solving these difficulties, he is elevating himself. By means of communicating with his boss, who had high blood pressure and suffered from stress at work, Mr. Zeng's positive way of thinking has had a good affect on him.

Now Mr. Zeng is no longer bogged down in the struggle to seek reputation and profit. He knows which path his life should follow. He feels that his life is meaningful, and he is fulfilled. The atmosphere surrounding him has become calm and peaceful.

After reading about Mr. Zeng, we see that sometimes when things are not going well, hope may be just on the horizon. My friends, perhaps you will want to give yourself a chance to understand Falun Dafa. It may bring unexpected changes to your life.

“Police Officer: Moving Towards the Path of Godhood (Part 3 of 3)”