(Clearwisdom.net) On October 8, 2011, Falun gong practitioners set up an information desk in downtown Birmingham. They demonstrated the Falun Gong exercises and exposed the Chinese Communist Party (CCP)’s 12-year-long brutal persecution of Falun Gong. A lot of people signed a petition to support Falun Gong. Some of them expressed their wish to learn Falun Gong. 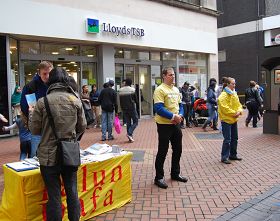 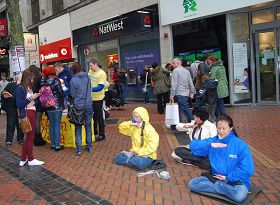 Falun Gong practitioners demonstrate the exercises in downtown Birmingham and tell passers-by about the CCP's persecution of Falun Gong in China. 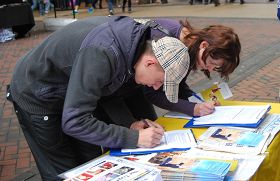 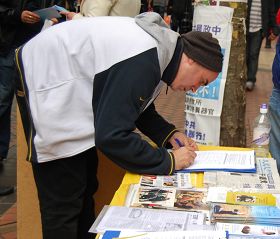 At around noon on Saturday, practitioners began to set up information desks on the pedestrian street in downtown Birmingham. Some passers-by came to inquire and take the Falun Gong flyers when practitioners were still busy hanging up the banners.

A young Muslim writer signed the petition to express his support for Falun Gong. He said that Falun Gong is the practice that he had been seeking for many years.

Dr. Jones works for a human rights group, which aims to protest racial discrimination and persecution. After signing the petition, he left his business card and told practitioners that he wished to help them.

Many Chinese passers-by also took Falun Gong information materials, such as Analysis of the CCP-Staged Tiananmen Square Self-immolation, Nine Commentaries of Communist Party, and others.

A Chinese female student said that she had a Falun Gong book in her home. Another Chinese student went to the information desk and viewed the Falun Gong information materials. A practitioner told him, “In China, one voice controls the media. Its purpose is to cover up the truth. Every political movement launched by the CCP, such as the Cultural Revolution and the Tiananmen Square Massacre, were based on lies. You should take this opportunity to find out the truth about Chinese history and Falun Gong.” The student agreed with the practitioner. He and his friends took away a lot of Falun Gong materials and newspapers, as well as copies of Nine Commentaries on the Communist Party.

Mr. He is an elderly Chinese who stayed to talk after taking the Falun Gong materials and signed on the petition with his Chinese name.

Many people signed the petition to protest the persecution of Falun Gong. Some of them also left their phone numbers and wished to learn the Falun Gong exercises.