(Clearwisdom.net) In recent years, some photographers and photo journalists from the Chinese Communist Party (CCP) media have revealed how they “changed heads” on photos during the Cultural Revolution to fabricate news. This technique has been used since the “Great Leap Forward” in 1958, continued through the Cultural Revolution, and is still in use today.

The CCP's power is sustained through violence and lies. Especially when the CCP wants to instigate a portion of the people to hate another group of people during political movements, it resorts to all kinds of lies. In order to slander and incite hatred against Falun Gong, the CCP staged the “Tiananmen Self-immolation.” Four hours later, the CCP media published a photo of one of the victims: Mr. Wang Jindong. In that picture, he was relatively thin, with a calm look on his face. But on-the-scene video showed Wang Jindong as being more heavy-set, with a clearly bigger head. After a short period, on a CCTV “Focus Interview” program, he looked different from both previous images, with a smaller head. How can one person have three different head shapes? 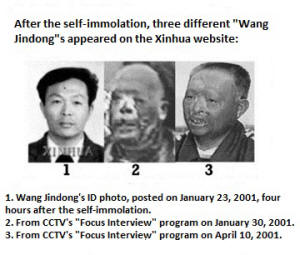 Obviously, the CCP media used the trick of “Changing the Actor” in the staged self-immolation. Just like when making movies, when one actor cannot continue to perform, another one is required to fill the role. In order to deceive people, the CCP tried to find a main actor for this short self-immolation “movie.” The second Wang Jindong sat cross-legged in a poor imitation of a Falun Gong practitioner, and shouted some strange slogans that appeared on CCTV.

In this CCTV video, several clues were revealed that suggested a staged media event. For instance, the plastic Sprite bottle that was supposedly filled with gasoline was in Wang's lap while he was on fire, without bursting into flames. The officer holding a fire blanket standing behind him waited for him to finish shouting his slogan, and then slowly covered him.

The second Wang Jindong performed the self-immolation, but could not continue the role, thus a third Wang Jindong was used to speak in an interview on TV, and toured all over China to speak. He even began writing a book in prison.

The documentary “Self-immolation of Deception, http://asp.fgmtv.org/ProgramDetail.asp?NewsID=45&OtherInfo=1” provides a nice summary of the issues discovered with the staged self-immolation.

Another victim of this ruse was Liu Chunling. A Washington Post journalist went to her home in Kaifeng City, Henan Province after the incident. Her neighbors said that they never saw her practice Falun Gong. Her daughter, Liu Siying, supposedly had an open throat operation after the incident, but could sing and talk four days later. They were obviously both victims of this staged event.

Another curious note is that the police do not normally patrol Tiananmen Square carrying fire extinguishers. But on the day the incident occurred, as soon as the self-immolation started, the police quickly took out many fire extinguishers and fire blankets from two vehicles. The CCP's journalists were even more prepared. They were on hand to take many close-ups and normal photographs, recorded the self-immolators' shouted slogans, and the little girl calling for her mother.

The CCP has performed countless similar fabrications in the past, and the CCP's attacks against Falun Gong are nothing new. They are designed to incite hatred against Falun Gong, a spiritual practice that teaches people to be good according to Truthfulness-Compassion-Forbearance. The CCP is doing all it can to block the truth from being revealed, but despite that, the truth is spreading widely, and people are more and more able to see through the CCP's lies.

“My Family Has Greatly Benefited from Falun Dafa”