(Clearwisdom.net) If you visit Tunghe Village, Taitung County, Taiwan, and ask the locals for direction to a clinic or a hospital, they will most likely point to a clinic with a large sign "Falun Dafa Is Good." This is a place that the villagers have come to know and trust. 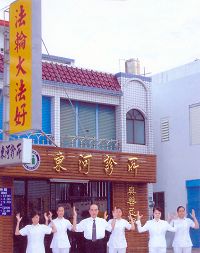 Dr. Guo Junnan, born in Chiayi in 1942, was admitted to the most popular medical college and chose pediatrics as his profession. After graduating, he set up his office in Tainan and became one of the most popular doctors in this city, regularly seeing 100 to 200 patients a day, or even 300 during the flu season. His office was crowded with sick children and parents from 7:00 a.m. until 10:00 p.m. He often didn't take any breaks and was exhausted by day's end.

Many thought that Dr. Guo had it made, as he had a wonderful wife and well-behaved, intelligent, and good-looking children, and he had also acquired wealth from his work. Instead, however, his health deteriorated and he couldn't enjoy what he had accomplished.

In 1985, Taitung County was a poor, remote, and undeveloped area, where modern medical equipment was not available, medical facilities were quite primitive, and salaries for medical personnel were very low. However, the area had beautiful scenery and fresh air, and an experienced medical doctor was much needed there.

Dr. Guo closed his Tainan clinic and moved his family to Taitung County, where he opened his new Tunghe Clinic. He thought that village life was not as stressful as city life, but he was still exhausted from regularly putting in long hours at work. That changed, however, in 2000.

3. Learning About the Persecution of Falun Gong and Becoming a Practitioner

At the end of 2000, Dr. Guo's wife, Ms. Xiang Xiaoping, turned on the television and heard about the Chinese Communist Party's (CCP) persecution of Falun Gong. She told her husband about it, and they decided to learn more about the practice. Three days later, they found a brief introduction of Falun Gong and practice site contact information in their local newspaper. Upon contacting the listed person, they were invited to view the video of the nine-day lecture series given by the founder of Falun Gong, Mr. Li Hongzhi. Dr. Guo thus began to practice Falun Gong on January 1, 2001.

After finishing the nine lectures, Dr. Guo and his wife headed for the bookstore and bought copies of Zhuan Falun and Explaining the Content of Falun Dafa. They finished reading Zhuan Falun in five days.

Dr. Guo said, "We bought all of the Falun Gong books that were available at the time and read them all. The more we read them, the more we loved them and the more we felt that they were righteous. We understood that one doesn't come across something like this in a thousand years. These books teach a cultivation method that I had been searching for over the past 20 years." 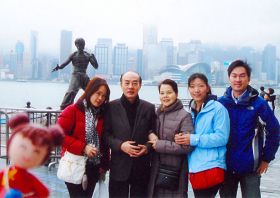 Dr. Guo Junnan, his wife Xiang Xiaoping, and their children 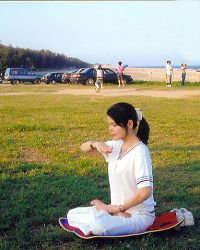 Ms. Xiang has not suffered from migraines since she began practicing Falun Gong

After practicing Falun Gong for two weeks, Dr. Guo was no longer exhausted after a long day of work. He said, "Now, even when I work from 7:00 a.m. until after 10:00 p.m., and even if I only get around three hours of sleep, I don't feel a bit tired."

Dr. Guo kept his clinic in Tunghe Village open even after he reached the retirement age of 65. Everyone who comes to the Tunghe Clinic gets a copy of Falun Gong, which includes a brief introduction to Falun Gong, as well as materials clarifying the facts about the persecution of Falun Gong in China. All four nurses that work at the Tunghe Clinic have also become practitioners.

"Broadly shines a Buddha's light,
Justly setting all things right.
Advance together, ever diligent,
To a glorious future."

One of Dr. Guo's patients is a woman named Asang, who is in her 50s. She used to suffer from frequent headaches and vomiting and was diagnosed with a brain tumor at a big city hospital. The doctors there advised her to have surgery to remove the tumor, but she refused, fearing that she might not survive the operation. She chose to have injections from Dr. Guo to control the tumor, but they didn't seem to help. Dr. Guo then told her, "Why don't you go read Zhuan Falun. Read it without any preconceived notions, without any thought about your illness or anything else, and without wanting anything." Asang disappeared for three months. When she returned, she told Dr. Guo, "I've read Zhuan Falun three times, and my headache disappeared, so I didn't return for the injections." Dr. Guo advised her to continue reading the book. Three months later, she was free of the brain tumor.

5. Telling the World that Falun Dafa Is Good

Taitung County has become a popular tourist area in recent years, and now many tourists, especially those from China, visit Tunghe Village. Whenever a tourist has health issues or injury, tour guides and bus drivers take them to the Tunghe Clinic.

Dr. and Mrs. Guo also installed a large vertical golden sign with the words "Falun Dafa Is Good" above the front door of the clinic and another sign, "Truthfulness-Compassion-Forbearance Is Good" on the right side of the front door, so that more people will have the opportunity to understand the truth and have good futures.