(Clearwisdom.net) The fourth annual Polish Multicultural Festival was held recently in Warsaw, with large parades on August 29 and September 5. 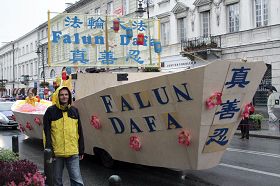 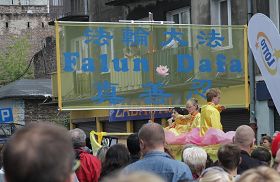 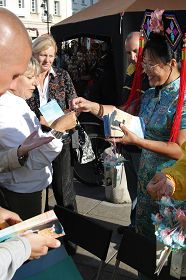 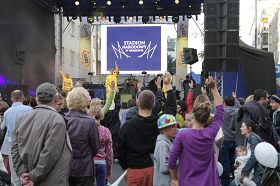 Among the many processions in the parade, a novel and unique boat-shaped float caught the attention of spectators. A large banner with the words "Falun Dafa, Truth-Compassion-Forbearance" on it was on top of the nicely decorated float. The music of "Pudu" and "Jishi" was played. Practitioners wearing golden exercise costumes demonstrated the peaceful and harmonious five exercises of Falun Gong. A practitioner holding a microphone and wearing ancient emperor's dress introduced Falun Dafa to the people on both sides of the street. Another practitioner wearing a dress from the Tang dynasty stood on a platform. Wearing a Manchu princess' dress was a slim and graceful practitioner who held a lotus flower. People took photos of this beautiful scene. Many parents put their children on the float, and took a photo to mark the occasion. On September 5, when the second parade appeared on the main street, the spectators stepped into the street and surrounded the float for a closer look.

A young Polish man who could speak Chinese, while riding his bicycle, ran along with the Falun Gong float, asking questions such as: "Is what you are demonstrating really Falun Gong? It's really beautiful, what dynasty of China is this kind of clothing from, how many years ago is that from today?" Upon receiving answers from Falun Gong practitioners, he expressed some doubts he had in his mind: "I know a lot of Chinese people, and some of them spoke to me about Falun Gong. How come what they told me is completely different from what I have seen today? There is no doubt, what you are displaying today is China's ancient culture. The message you have given me is beautiful. Falun Gong is just so beautiful, not only are the movements beautiful, and the costumes beautiful, but I really have no words to describe the elegant disposition that these people demonstrating the exercises are showing. The lady sitting in meditation, I just found out, is over seventy years old. Many people are taking photos with her. How could some Chinese say that such a beautiful exercise is not good?"

After hearing the questions of the young man, a Falun Gong practitioner said: "It's not Chinese people saying that it is bad. Early on before the persecution there were over 100 million Chinese people saying Falun Gong was just great and so they persisted in practicing. The former CCP's head Jiang Zemin was panic another 100 million or even a third 100 million people would say that Falun Dafa is good, and that if they abided by Truth-Compassion-Forbearance then it wouldn't be easy for them to be controlled by the CCP's lies and violence. Therefore, Jiang Zemin and the CCP colluded with one another initiated this brutal persecution, which has continued for eleven years."

A Falun Gong practitioner held a microphone and clarified the facts to the surrounding spectators-- from how the CCP's state-run media instigated hatred by promoting the staged self-immolation incident, to the CCP's crimes of harvesting organs from live Falun Gong practitioners, to how countless Chinese people during this brutal persecution have mistakenly believed lies and are unaware of the truth.

Upon hearing the true situation, the Polish people on the scene were all shocked. This young Polish man, after learning the truth, wanted all the Falun Gong information materials. He left his contact information and said he understood Falun Gong more. He said: "I certainly must tell all my Chinese friends the true situation of this matter, and this persecution must stop. This world can't do without Truth-Compassion-Forbearance."