(Clearwisdom.net) On August 8, Falun Gong practitioners from Scotland held activities in front of the Scottish parliament building to clarify the truth about Falun Gong and expose the brutal persecution in China. 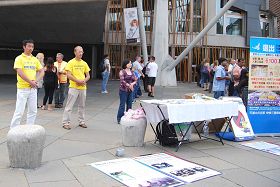 Practitioners demonstrated the exercises, passed out informational materials and talked to tourists. Many people signed the petition against the persecution. 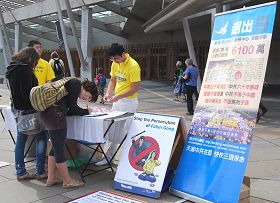 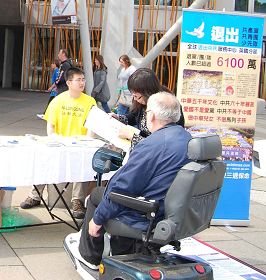 As he signed the petition to support Falun Gong, Mr. Nick Kyle, a teacher and the chair of the Scottish Society for Psychical Research, told practitioners that he had seen their events in London before. He said he was shocked by the brutality of the persecution. He said it is not acceptable. He wrote to his representative asking him to conduct an investigation. He said the information about the persecution should be confirmed and then made available to the public. 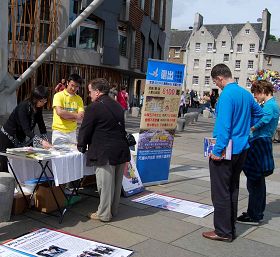 Mr. Kyle studies super-normal phenomena. Based on his own research, he believes that meditation is beneficial. He said he has a lot of evidence showing meditation is good for the body, mind and emotions. He said that all governments would like to see their people in positive physical and mental states, so it is hard to understand why people are being persecuted for doing something so beneficial.