NEW YORK--After two rounds of elimination, 17 Chinese bel canto vocalists have made it to the 2010 NTDTV Chinese International Vocal Competition's list of finalists on Saturday. 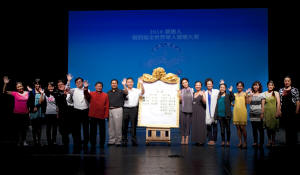 "New York is the cultural crossroads of the world ... and hosting the Chinese International Vocal Competition here enabled us to attracted contestants from places such as Brazil, Argentina, Germany, Taiwan, and Japan," said Lan Yeliu, one of the five judges on the panel, at a press conference following the semifinal.

In its fourth year, the competition is said to be a "world-class competition" that reflects the overall level of Chinese bel canto vocalists around the world. The competition aims to revive traditional Chinese culture and promote Chinese artists to the world, according to its mission statement.

"Every time I look at the contestants, a thought always flashes to my mind, namely tomorrow, one of these contestants will become an international star," Lan said.

Among the contestants was tenor Shen Jun-Ching, a vocal teacher from Taiwan who said that being a musician carries far deeper meaning than merely possessing superior singing skills.

"Music is a carrier of truthfulness, compassion, and beauty to the ears of the audience members," said Shen, a finalist. "An excellent vocalist needs to have a good voice, technique, understanding of culture, and the ability to decipher the different pieces of music--all of which are gradually accumulated as one journeys through life."

He said that a vocalist must be loyal to the composer of the song by capturing the spirit of the time.

"Music is more than the notes--a musician has to bring the notes to life," said Shen, who sang Non Più Andrai, Farfallone Amoroso from Mozart's Le Nozze Di Figaro and The Big River Going East, a Chinese piece. "I really like the delightfulness, lightness, and innocence reflected in Mozart's work. I also love Verdi's profound delineation of humanity."

Sunday will mark the event's final round at the same theater. Following the singers' performance, the singers will travel to Westchester to watch a Chinese artistic and cultural show by Shen Yun Performing Arts at the Performing Arts Center at SUNY Purchase College, followed by the vocal competition's award ceremony.

"I think tomorrow we are going to have another very exciting day," said Lan. "The contestants are all very experienced, and as judges, cutting any of them is ... but after all, there are only so many awards, so we have to see how each of them do tomorrow."