Whereas, Falun Dafa, also known as Falun Gong, is a peaceful and healthy self-improvement practice rooted in ancient Chinese culture that centers around the universal principle of Truthfulness, Compassion and Forbearance and consists of five gentle exercises, including meditation; and

Whereas, The teachings of Falun Dafa, through meditation and spiritual cultivation, are perceived as an effective means of improving overall mental and physical health, as well as reducing stress; and

Whereas, Master Li Hongzhi, the founder of Falun Dafa, has helped millions across the world improve their health and moral standards, as well as deepen their understanding of life, humanity, and the universe; and

Whereas, Since July 1999, when China's former president launched the "eradication" campaign against Falun Gong, hundreds of thousands of Falun Gong practitioners have been detained and tortured for their beliefs; and

in Fort Wayne, and recognizing their commitment to Truthfulness, Compassion, and Forbearance.

In Witness Whereof, I have hereunto set my hand and caused the seal of the Office of Mayor, City of Fort Wayne, Indiana to be affixed this 20th day of July, 2010. 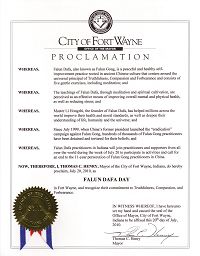