Experiencing the Power and the Many Benefits of Falun Dafa (Photo)

(Clearwisdom.net) I started practicing Falun Dafa in 1994. Over my path of cultivation, I have experienced the power and the many benefits of Dafa. I want to thank Master Li for giving us such a wonderful practice. 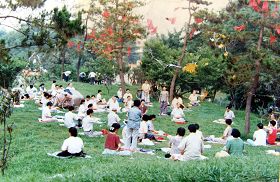 Morning excises at Jiefang Park group study site in Wuhan City. In the left upper corner, practitioners were demonstrating the 'Falun Heavenly Circulation Exercise' for new practitioners. The practitioners at the front were doing the sitting exercise together.

In May 1994, I started practicing Falun Dafa. Because practitioners are expected to be considerate of others and put their interests before one's own, I fundamentally changed my behavior.

After about a month of practicing Dafa, my company started to evaluate the employees' job titles. Based on my seniority, capabilities, and connections, the possibility for me to get a senior job title was high. But even though the quota was limited, and the competition was fierce with everyone seeking to advance their positions, my heart was calm. Many leadership personnel talked to me about various opportunities, and the strength of my candidacy, but my heart was as calm as water. I would not have been able to respond that way before practicing Falun Gong. Even though I did not get promoted to a higher job title, or obtain the large pay raise that those promoted received, I was happy for the changes that had taken place within myself.

Since my xinxing had elevated, I went through some huge physical changes as well. Prior to practicing Dafa, I had high blood pressure, back problems, heart problems, arthritis and many other conditions. After I started to cultivate, I was free from those complaints. I looked younger and was very energetic. People commented that I looked like forty something, but I am actually over sixty years old. My blood pressure is similar to the numbers I had when I was eighteen years old. One time, my grandson wanted to go on a roller coaster ride, but my daughter and son were both afraid. I did not think much of it and accompanied my grandson on the ride, and enjoyed it like a teenager. I did not feel any discomfort afterwards, though many people feel dizzy from riding such machines.

Before 1999, an important official at a CCP school came to our practice site. He was over eighty years old with metal implants in his leg. Even so, he was able to cross his legs, double-lotus, for Falun Gong's fifth exercise. It was amazing.

I remember one day, a thirty something man came to our practice site. He was addicted to cigarettes. He smoked two to three packs per day and had been unable to quit. His face looked yellow and he was very skinny. In less than a week of practicing Dafa, he quit smoking, and his face looked healthy. As of now, because he persisted in his practice, he has been unlawfully detained and sent to prison. Nonetheless, he still believes in Dafa.

True stories like these are countless. Dafa has taught us the purpose of our lives, to return to our true selves and purify our heart and body. Thus, so many of us are firmly resolute on the path of Dafa. I hope everybody in the world can learn the truth about the CCP's lies and, thereby, choose a bright future for themselves.