(Clearwisdom.net) Bo Xilai, the notorious Chinese Communist Party official and human rights abuser, has been sued in twelve different countries. The Australian Supreme Court of NSW issued a default judgment against Bo on November 5, 2007, recognizing that he had failed to provide a defense for the case brought against him by Mr. Pan Yu. A Spanish National Court judge indicted Bo for genocide against Falun Gong in Nov. 2009. Still, Straits Exchange Foundation Chairman Jiang Bingkun invited Bo to visiti Taiwan during his meeting with Bo on June 29, 2010. People from all circles in Taiwan question and disapprove of the invitation of such a human rights criminal to Taiwan.

Theresa Chu, spokesperson for the Global Coalition to Bring Jiang to Justice, said Bo was the chief perpetrator in the whole persecution system. He is the most fierce and brutal toward Falun Gong practitioners. "Jiang Bingkun invited Bo to Taiwan and plans to treat him as a distinguished guest. This is against President Ma's political goal of following the two international human rights conventions. It is very unwise. It sets a bad example for human rights in Taiwan. Bo knows about the lawsuits around the world against him. He is clear that Falun Gong lawyers are waiting for a chance to have him arrested. He is challenging law enforcement in Taiwan. The one who invited Bo is also challenging the Taiwanese government's determination to safeguard international human rights and its international image." Ms. Chu stressed, "We are absolutely sure he will face hundreds of thousands of Falun Gong practitioners, human rights lawyer groups and law enforcement in Taiwan."

Chen Ting-fei, Taiwan Legislator and member of the Coalition to Investigate the Persecution of Falun Gong, said she was strongly against the invitation. Treating a human rights perpetrator as a distinguished guest is the equivalent of agreeing with his crimes against human rights. "Jiang should tell the Taiwanese people clearly why he has invited such a person who is facing arrest. If Jiang insists on this invitation, many people will follow Bo everywhere he goes to protest."

Professor Chang Ching-Hsi, chairman of the Taiwan Falun Dafa Association, said as soon as Bo arrives in Taiwan, he will be sued. "We are well prepared for it." 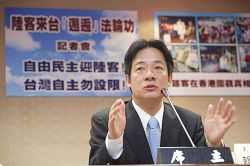 Mr. Lai Ching-teh, Taiwan Legislator and President of CIPFG Asia, said, "Taiwan has officially signed two international human rights conventions. This invitation is against the conventions and sets a bad example. If we don't safeguard human rights in Mainland China, don't target the high-ranking officials who persecute the Chinese people's human rights, if we accomodate them like this for short-term interests, I'm afraid Taiwan will be the next place human rights will be violated." 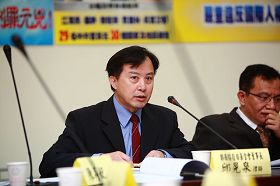 Attorney Chiu Huang-chuan, the Deputy Head of the Asian branch of the Coalition to Investigate the Persecution of Falun Gong in China

Attorney Chiu Huang-chuan, the Deputy Head of the Asian branch of the Coalition to Investigate the Persecution of Falun Gong in China, called for the Taiwanese government to take action when a persecutor of Falun Gong comes. His crime against Falun Gong can't be ignored. He said, "We need to tell our government, when you extend your hands to welcome these criminals, you should know the hands you shake are covered with blood. How can you shake such hands?" Attorney Chiu stressed, "No matter what economic interest the Economic Cooperation Framework Agreement (ECFA) gains, we can't turn our backs and neglect human rights violations and the CCP's persecution of Falun Gong. If ECFA doesn't pay attention to human rights, it will become an assistant to the CCP's violation of human rights and persecution of Falun Gong." 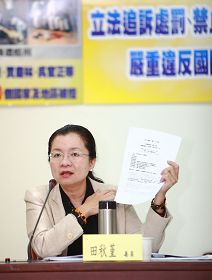 Legislator Tien,Chiu-Chin called for the Taiwanese government and people not to be afraid to show concern for their fellow Chinese under persecution. She said, "If we think it is no concern of ours, someday, we may suffer the same situation as Falun Gong practitioners in Mainland China."

“Paying Attention to "Start Cultivating Yourselves" ”