(Clearwisdom.net) On the evening of July 1, a parade was held in downtown Vancouver to celebrate the 143rd celebration of Canada Day. Falun Gong practitioners' Divine Land Marching Band and waist drum troupe participated in the parade and their performance received enthusiastic applause from the parade spectators. 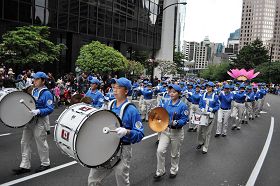 The parade started at 7 p.m., with over 50,000 people packed downtown to watch the parade. Among the 48 participating groups, Falun Gong practitioners' Divine Land Marching Band, waist drum troupe and float were unique.

Near the finish point of the parade, young people danced to the drumbeats of the waist drum troupe. When she saw a practitioner distributing informational materials, an Asian girl asked for a copy to read. A couple from Shanghai who watched the parade remarked that Falun Gong is very good.

That same day, the Vancouver practitioners also participated in a parade in Richmond. That parade featured 102 groups and attracted over 10,000 spectators. Richmond has a large Chinese immigrant population.

“Indonesia: Practitioners Call on Singapore Government not to Join the CCP in the Persecution of Falun Gong (Photos)”