(Clearwisdom.net) Returning for the second time this season, Shen Yun Performing Arts thrilled and captivated audience's hearts for three shows at the Brown Theater at the Wortham Center, on July 2-3, 2010. 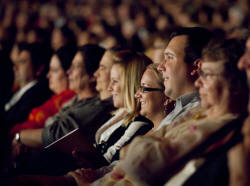 The audience at the Brown Theater at Wortham Center on Friday evening, July 2, 2010.

Scott A. Sherman, the senior counsel of Health, Environment and Safety for Occidental Petroleum Corporation, said he was awed by the "firecrackers of color" and "explosion of colors" that he witnessed during the Shen Yun performance.

"... and then to see [a fireworks display] two nights later [July 4] here in Houston downtown, it's really amazing," he said after the show.

"It's appropriate I think, for us to see this on July 2, two days in advance of our holiday here, July 4, which we celebrate with fireworks.

"It's beautiful, amazing. From the opening curtain, the flash of color, the beautiful music, the talented performers, the important pieces that are being performed tonight, it's a thrill for all of us."

"So I think it's important for all of us to see it, to experience the colors, to see this scenery on the beautiful backdrop, and really think about the performances that we're seeing," he said.

He also appreciated the way the show's hosts introduced each program, allowing the audience to have a better understanding of the different performances.

Mr. Sherman especially liked the dance set, Wu Song Battles the Tiger, saying, "Oh, the moving battle scenes of the gentleman who had too much to drink was so much fun."

But he also enjoyed "the very serious pieces [Nothing Can Block the Divine Path and Astounding Conviction], which dealt with deep cultural issues" and "the tension involving the freedom of expression."

"The outstanding solo vocal performers," he said, "was something that we typically don't see. They are very, very talented."

"Struck by the Visuals"

Also in the audience were realtors, Karen Fahrneier and Diana Coleman.

"Oh, and another thing, I loved the words on the screen. I sing opera myself and I think a lot of people benefit from having the translations so they can know what they're singing about."

Ms. Fahrneier added, "The visuals struck me the most. All the costumes they used, oh, and the props, the ribbon dancing. [Flowing Silk]. The orchestra was very good; we would have liked to hear more of it ... I loved the dancing, loved the stories."

"It's Worth Seeing a Second Time"

"I also saw Shen Yun last year, and both shows are very, very enjoyable, impressive. Great choreography, great acrobatics, and great costumes. It's always impressive and a fantastic performance ... it's worth seeing a second time," he said.

He especially liked the dance set, Tibetan Dance of Praise for the "choreography and the costumes," adding, I also like the story behind the drunken tiger hunter, [Wu Song Battles the Tiger]. Very good. I like them all, for individual reasons."

Shen Yun "A Most Unique and Exciting" Show 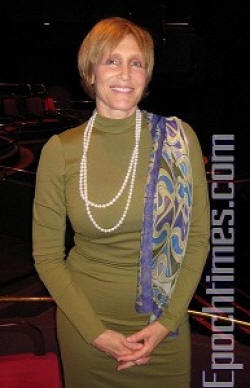 Taking the show in on Friday evening was Curry Glassell.

Among the many distinguished audience members was Curry Glassell, the daughter of the late oilman and philanthropist, Alfred Glassell Jr. Ms. Glassell currently manages her family foundation and is involved in several businesses.

Ms. Glassell described her experience of Shen Yun as "a most unique and exciting evening, and an event that everyone in Houston really should see."

After seeing the show, she realized that she had been unaware of the richness of traditional Chinese culture.

"I didn't realize there was so much rich history in China, and I didn't realize how many tales and extraordinary experiences one could learn about Chinese people," Ms. Glassell said of the world's premiere Chinese dance and music company.

"I really didn't realize that so many of the Chinese traditions have to do with the divine gods and the history of god and man coming together, and the fighting and the good and the evil. I really didn't know about that, that was very interesting to me and it reminded me of our Greek history as well ... I for one enjoyed learning and would love to learn more."

Ms. Glassell described the show as an "orchestration of color and beauty," and said that the colors were beyond this world.

She said that the costumes were made from "beautiful materials" and "the sheer fabrics were extraordinary. The dancers were light and airy and gorgeous ... it was stunning. I really enjoyed it very much."

“Gratitude for Revered Master's Boundless Grace: Doing Well What Practitioners Should Do”