Teacher Protected My Family When a Pressure Cooker Exploded

After the Pressure Cooker Exploded in the Kitchen 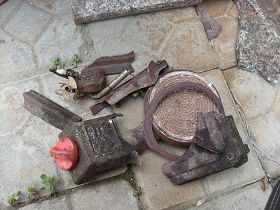 My two-and-a-half year-old granddaughter was playing in the kitchen when the pressure cooker exploded. The most fortunate thing is that the pressure cooker cover fell right behind her and didn't even touch her when it broke. After my granddaughter heard the explosion she screamed, "It scared me to death. It burned me!" We immediately checked her body and found that she was not injured at all, except for a tiny burn mark that splashed on her body from the hot soup that was cooking.

When I looked around the house I noticed that the floor in the north room was full of broken glass.

I realized that the sound I heard of things falling to the ground was from the pressure cooker valve. It had been blown off from the explosion, and the force from the explosion caused it to fly into the air, and pass through the yard. It then hit the window of the north room. In the window glass was a big hole where the valve broke through.

If the gas tank had exploded, the consequences would have been devastating. My two-and-a-half year-old granddaughter might have been killed. However, she is very pure. Since I often teach her to recite "Falun Dafa is good," we knew that Teacher was protecting my family, and because of this my husband and I were moved to tears.

No Injuries After a Stockpile of Beer Bottles Collapses

Xiaoyu, who is in her forties, is a consignor of a brewery in Tianjin Province. She understands the truth about Falun Gong and she often recites "Falun Dafa is good." Whenever she hears someone slander Falun Gong, she stops them and clarifies the truth to them.

One day in the summer of 2007, Xiaoyu was counting inventory of a stockpile of beer bottles. Suddenly the whole pile of beer bottles collapsed on top of her. She couldn't run away as a huge number of bottles pounded her body. As they fell, glass shattered all over the place. Her co-workers heard the sound and came to rescue her. They all thought that she must have been severely injured from the accident, but after they pulled her out of the glass, even though she was wearing only short pants and a T-shirt, she was not injured and had no cuts at all.

The people who were with her were all very surprised. The leader of the factory still feared that she might have been injured in some way, so he called an ambulance to take her to the hospital for further examination. The examination results showed that she had no injuries.