(Clearwisdom.net) On July 17, 2010, Falun Gong practitioners in Denmark held various activities, showing the general public the beauty of Falun Dafa and appealing to people to see the evil nature of the Chinese Communist Party (CCP) and help to stop the persecution of Falun Gong in China. 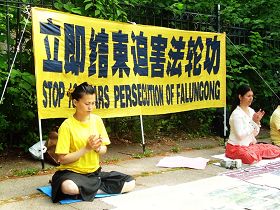 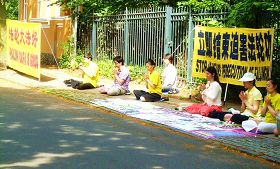 Practitioners gathered in the morning at the Chinese Embassy in Denmark, peacefully protesting the Chinese Communist regime's eleven-year-long persecution of Falun Gong. They displayed banners reading, "Falun Dafa is Good" and "Stop Persecuting Falun Gong Immediately," and displayed posters describing the spread of Falun Dafa around the world and exposing the Chinese Communist regime's brutal persecution of Falun Gong. During the protest, practitioners also demonstrated Falun Gong exercises. Many passers-by were moved by peaceful and solemn manners displayed by practitioners. They expressed their heartfelt respect to the practitioners' perseverance in clarifying the truth. 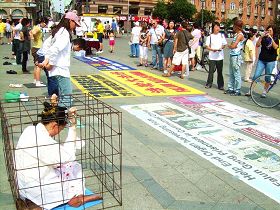 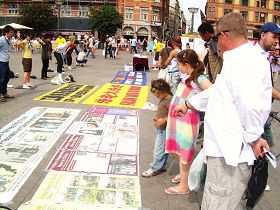 University lecturer Ms. Carona has greatly improved her physical and spiritual well being since beginning Falun Gong cultivation practice. She said that Falun Gong is the most important part of her life, "In China Falun Gong practitioners cannot freely practice Falun Gong. They cannot have their own belief. This is wrong. Here we have tourists from around the world. It is very important that we clarify the truth about the brutal persecution of Falun Gong to people. I hope all people around the world with justice stand together to resist and stop this most inhuman human rights abuse in history."

Diego Basile is from Italy. He is a lecturer in economics. Basile said that he heard about Falun Gong in Italy and strongly supports the peaceful and rational activities held by practitioners to oppose the persecution. He wanted to donate some money to support Falun Gong at the event, but was politely turned down by practitioners. Basile and his girlfriend signed the petition supporting Falun Gong's campaign to end the persecution. Basile said, "I have been concerned with the effect of capitalism and the dictatorial Communist regime on Chinese people. I think the most terrible thing is that the rapid economic development in China made the Italian government blind to the human rights abuses by the Chinese Communist regime. When I signed the petition to support Falun Gong's effort against the persecution, I felt much better. I pray for the Falun Gong practitioners who are tortured in the Chinese prisons."

After learning about the brutal persecution of Falun Gong by the Chinese Communist regime, a French gentleman who lives in Denmark was shocked. He lived in Thailand once and also had been to China. He is very concerned with China's development, especially its human rights problems. As a westerner who grew up in a democratic society, he couldn't comprehend the deceitful propaganda disseminated around the world by the Chinese Communist regime. He also couldn't imagine how the regime brutally persecutes its own people, especially to a group of people whose belief is Truthfulness-Compassion-Forbearance. He said that it is very difficult for him to learn about the real lives of Chinese people due to the pervasive propaganda on China's Central TV (CCTV). He was very pleased to see the free media introduced to him by practitioners.

Mr. Lu is a freelance reporter who grew up in Denmark. His understanding of Falun Gong is limited to the slanderous propaganda from the Chinese media. After Falun Gong practitioners told him in detail the facts about Falun Gong, he suddenly understood. Practitioners also patiently answered all of his questions. Mr. Lu said that he would study the materials given to him by the practitioners.

Falun Gong, also known as Falun Dafa, is a traditional Chinese spiritual discipline for mind and body. The practice involves slow, gentle movements and meditation. It is easy to learn, enjoyable to practice, and free of charge. Its principles are based on Truthfulness-Compassion-Forbearance. The practice began in China in 1992 and quickly spread by word of mouth throughout China and then beyond. Its beneficial effects in uplifting an individual's physical, mental, and spiritual health, not to mention its positive influence in the community and society as a whole, have been undeniable. In fact, Falun Gong has been practiced by over 100 million people in 100 countries. The main works of Falun Gong are available in over 30 languages.