Recalling Master Teaching the Fa in Shijiazhuang City in 1994 (Photo) 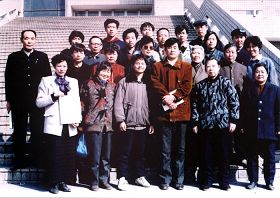 Master Li with some students from the Shijiazhuang Class

I had many chronic diseases before practicing Falun Dafa, including colitis, systemic hyperosteogeny, rheumatoid arthritis, and a rare blood vessel disease that affected my brain. My whole body was weak and very susceptible to cold. In summer, I wore a comforter and an insulated jacket, and I didn't dare to open the window. Later I couldn't move and lived in a hospital for six years with an additional-two-years of bed rest at home. Neither traditional Chinese medicine nor Western medicine had any healing effect for me. I had to ask for help from qigong. One after another, I learned more than ten kinds of qigong in total; however, none removed the fundamental causes, and I still needed medication.

One day in the beginning of March 1994, a friend who had practiced another qigong in the past came to my home and brought me China Falun Gong. Finding that the cultivation system was easy to learn, and that this system taught people to be good and to cultivate xinxing, I decided to try it.

Several days later, I attended Master's Fa-teaching lectures in Shijiazhuang. I stayed with a practitioner from Beijing called Xiao Zhang. She had already attended several of Master's lecture series, yet she still traveled to attend the lectures in Shijiazhuang. She said, "This cultivation system is very great. I couldn't move before because I'd had a stroke, and I had to hire a caregiver to look after me. After attending several of the lecture series, all my illnesses disappeared."

Master Is Always Considerate of His Disciples

I attended five lecture series in total, and I witnessed some things about Master while He was there teaching the Fa. In the Shijiazhuang Class in March 1994, Master reduced the 10-day class to an 8-day class in order to help disciples to save hotel expenses. Although the total number of days were reduced, Master didn't reduce the teachings. He gave two lectures on both Saturday and Sunday. On the weekdays, Master gave the Lecture from 7 p.m. to 8:30 p.m., with another half an hour to teach the exercises every day.

Master started to adjust practitioners' bodies on the third day. Master told us that disciples who had a lot of illnesses in the past would feel uncomfortable that night; those who had serious illnesses might feel cold and pain, and have a fever as if suffering a bad cold. All the fundamental causes treated by doctors or qigong masters in the past were still there; He would get rid of them, but we also need to suffer a bit. No matter how serious our reaction would be, Master guaranteed that we would not have any problem. But we needed to come to class the next night; otherwise it would be a loss for us. [Editor's Note: These are not Master Li's exact words, but are reproduced in this article from the practitioner's memory.]

Upon hearing Master's words, I was wondering whether I would have that kind of reaction. As I thought about it, I arrived at the hotel. As soon as I walked toward the stairs, I felt pain and cold throughout my body, and I had a fever. My pulse became unsteady, and I felt very weak and had difficulty breathing. I had a hard time climbing the stairs to the fifth floor. I did so by leaning on the stairs, and I fell into the bed finally. Ms. Xiao Zhang made a bowl of millet congee for me, but it was too painful for me to stand up.

The following day, I remained in bed. When it came near to 6:00 p.m., I suddenly remembered Master's words from last night, that regardless of how serious the reaction was, to attend the class; otherwise it would be a loss. I then hurried to climb out of bed and took the bus to the classroom with the help of Ms. Xiao Zhang. As soon as I heard Master's teaching, I cheered up. On the third day after my reaction, I still couldn't move and only had a small piece of steamed bread. (When I previously suffered these kinds of serious symptoms, I went to the hospital.) On the fourth day when I got up to use the restroom, I felt my body was very light. I tried to jump, and I jumped quite high. I happily shouted in my heart, "I'm free of illness. Master has removed the illness from my body!" After that, I started to firmly believe in Dafa.

Many practitioners at that time suffered from long-term, chronic illnesses. After attending the class, Master adjusted their bodies, as well as those who suffered incurable diseases. I personally saw two girls with leukemia being adjusted by Master in the class. Their parents presented Master with silk banners to express their appreciation!

Master looked tall and handsome with a resonant voice. He always gave a whole lecture at one time without any notes. There was always a water bottle on Master's desk, but I never saw Master drink any of it. When we learned to do the exercises, Master asked a disciple to stand on the platform to teach all the movements, then He walked around to personally correct our movements. Master always looked patient and compassionate.

Master lived frugally. He always wore a black suite with a white shirt. His suit was always very straight and looked clean. When we had a meal together, Master reminded us not to drop grains of rice and not to waste food. It was said that Master and three disciples bought five boxes of rice but only finished four boxes. The disciples wanted to throw the fifth one away the next day because it had gone bad, but Master stopped them and had the fifth one Himself.

Master charged the lowest prices throughout the country for classes. It was said that officials from China Qigong Science Research Society made the decision to charge 70 to 80 yuan per person for Master's classes in the beginning; however, out of consideration for disciples, Master negotiated with the officials and reduced the tuition fee to 50 yuan, and only half that for senior citizens. After every class concluded, Master had his picture taken with practitioners upon their request. Master also checked the photography fee in order not to increase disciples' financial burden. When the photographer told Master to charge more than 10 yuan for each photo, Master said, "No, it's too expensive." Afterwards, a disciple helped to print the photos and only charged 2 yuan each. Master then agreed and happily took pictures with practitioners. I looked aside when Master took every photo. Master's smile was so compassionate and kind. I feel so happy to have a group picture with Master included in it.

I Benefited Physically and Mentally After Practicing Dafa

One year after I practiced Falun Gong, I became whole. People who knew me all felt surprised, saying, "You look so beautiful and young." Although I was a long-term invalid, all my illnesses disappeared after I practiced Falun Gong. Every year I saved a lot of money in health expenses for the country and my company. In addition, I could go to work to make my contribution.

My mom was over 80 years old at that time. She suffered from high blood pressure and heart disease. My brothers' and sisters' were in poor health as well. I persuaded them to practice Falun Gong with me. In the beginning, they didn't believe me, saying "My time is limited. I need to take care of my baby and go to work. I don't have extra time to study Falun Gong." After seeing the great change in me, they all believed that Falun Dafa is good. When I first started practicing, I lived at my mom's house. At that time, I led a group of elderly women to do the exercises every morning. Those women had all kinds of illnesses. Three to four months later, they all were healthy with a rosy complexion. This overall outcome made people around us all believe. My mom, two sisters, and my sister-in-law also started to practice Falun Gong. My two daughters-in-law also walked into Dafa later, and they gained physical and mental benefits.

Compassionate Master takes care of each Dafa disciple at every moment and protects us. Our practice site was under a pavilion in a park. Every day, we practiced the fifth exercise first for an hour, and then we did the first to fourth sets for an hour. One assistant used a recording machine to play the exercise music; another assistant took charge of teaching people to do the exercises. One day I got up late and hurried to the practice site. On my way to the practice site, there were two dirt roads, beside which were two large fishponds. When I rode there, I heard the exercise music and then felt I had to hurry. I hurried to ride, but I ignored a big water pipe in the middle of road. As soon as I rode on the pipe, I lost my balance on my bicycle and fell into the fishpond. Finding that I was one meter away from the bank, I wondered how to handle it. If I shouted for help, practitioners would come to save me; but it would affect their doing the exercises. To my surprise, I felt as though someone held me up. I stood in the water. I tried to touch the bottom but couldn't reach it; therefore the fishpond was not shallow. I heard afterwards that the fishpond was over twenty feet deep. I seized a branch on the bank, and I felt that I couldn't bear it for long, since it was cold in September. At this moment, a young man in white sports clothes saw me and pulled me onto the bank. He helped me adjust the bicycle handlebars so I could ride home. After I got home, I found that I was hurt badly, with wounds covering my painful body. I thought that if Master didn't protect me, I might have already lost my life.