(Clearwisdom.net) On the 23rd of May 2010, Falun Gong practitioners held an event in Munich to call for an end to the Chinese Communist Party (CCP) persecution of Falun Gong and to support the 73 million that have already quit the CCP. Munich is the largest city in the south of Germany. Marienplatz in the center of town is always packed with tourists. Practitioners' exercise demonstrations and informational exhibits attracted their attention. Having learned the truth, people readily signed the petition form, condemning the persecution. Some mainland Chinese also renounced the Communist Youth League at the event. 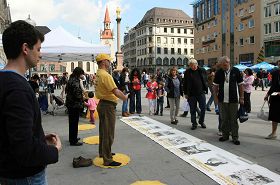 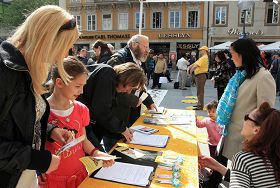 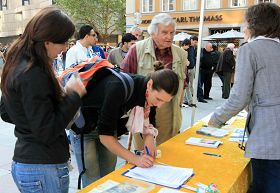 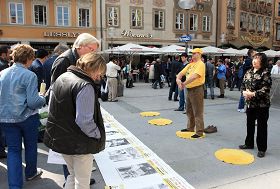 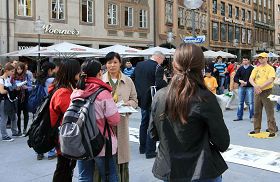 Clarifying the truth to Chinese people 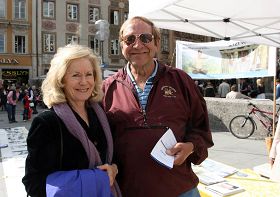 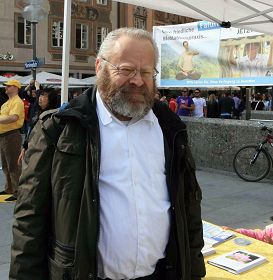 Bavarian map surveyor Erich Landstorfer said, "People must have human rights, so I will sign."

Judging from the interest shown, people longed to learn what Falun Gong is, why the practice is persecuted in China, why millions have quit the CCP, the truth about CCP's organ harvesting from living Falun Gong practitioners, etc. When people asked the questions on their minds, practitioners answered them patiently. People were shocked to learn that what drove the persecution was that practitioners followed the principles of Truthfulness-Compassion-Forbearance, which were not tolerated by the CCP. German residents and tourists from other countries found this hard to believe. They asked, "If Truthfulness-Compassion-Forbearance were not allowed to exist, what else would people need?" Therefore many put down their names to show their condemnation of the CCP's tyranny and support for Truthfulness-Compassion-Forbearance.

Michaela Volker, a doctor, read the exhibits for a long time, talked with practitioners and watched the exercise demonstration. Later she signed to condemn the persecution. She said she was a victim of sex abuse, but she thought that the persecution of Falun Gong practitioners was far more severe than what she had gone through. She hoped her signature would help stop the persecution as soon as possible. She wished practitioners good luck and success.

A Bavarian map surveyor, Erich Landstorfer, said, "People must have human rights. Such evil should not exist. Therefore I will sign to stop it."

An American tourist spoke fluent Chinese. In the 1970s he used to work for President Nixon and was in the presidential entourage to visit China in 1972. He worked for a long time for the US government before retirement. Talking about his reasons for signing, he said, "I believe in freedom, that people should be allowed to express their views in a way that feels right to them. As we normalize relationships with China, different voices must be heard."