(Clearwisdom.net) In 1996, Falun Dafa was spread to Zaoqiang County, a small town in the south of Hebei Province. Since then, numerous people with predestined relationships have taken the path leading to one's true self, and people in this area have had the hope of salvation.

By July 1999, in just three years, the number of Falun Dafa practitioners in Zaoqiang County had already reached over a thousand. They were from every area of the county and from every social class--from county government officials to common people. Practitioners came from all walks of life. During those days, their hearts were happy and they were at peace. Many practitioners were freed from the pain of diseases and they were full of energy. Getting rid of diseases reduced their financial burdens and made their family lives happier. They could do their jobs better as well. All the time and on every occasion, they strictly followed the principles of Truth-Compassion-Forbearance, and they tried hard to be good no matter where they were. They helped others and developed harmony in their neighborhoods. They were examples of the wonderfulness of Falun Dafa with their practical deeds. 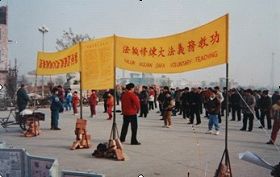 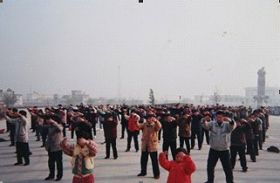 Ever since the Chinese Communist Party (CCP) started to persecute Dafa in July 20, 1999, practitioners in Zaoqiang County have been persecuted simply for speaking the truth, telling others that Falun Dafa is good and Truth-Compassion-Forbearance is good. Four practitioners were sentenced to prison and 17 to forced labor camps. Over 30 practitioners were detained and subjected to over 100 brainwashing sessions. The amount of money extorted from practitioners now totals over 500,000 yuan. The persecution has been the source of very grave suffering for kind practitioners and their families, friends, and relatives.

Nonetheless, practitioners have remained firm in their faith and have resisted peacefully and rationally. They are conscientious in performing their jobs, and many are key employees in their companies. Practitioners who engage in trade sell quality goods at a fair price, cheating neither the old nor the young. Those who work on farms are diligent, kind, and always ready to help others. Falun Dafa practitioners continue to cultivate themselves according to Truth-Compassion-Forbearance and validating the wonderfulness of Dafa. At the same time, they have stepped forward to clarify the truth of Falun Dafa regardless of the danger to themselves. They have been handing out materials explaining the facts about Falun Dafa day after day for ten years. Their sole purpose is to let people know the facts about Falun Dafa, to save those who are deceived, and make it possible for people to have wonderful futures.

In fact, only the wicked are afraid of being exposed and the truth being known. Officials from all levels who used to be deceived and threatened and participated in the persecution have now chosen to protect practitioners after understanding the truth. Many people who were poisoned by lies are no longer hostile to or disgusted with practitioners. They now understand and support practitioners and have even become friends of practitioners. They say, "You have persevered for so many years. I really admire that. Falun Dafa practitioners are truly extraordinary." "For these past years, I have seen that you never scheme against or harm others. You are truly kind. Nowadays, such people are hard to find. I feel really comfortable and have a sense of security when I am with you."

People Who Know the Facts Are Spreading the Truth

At the beginning of the persecution, many people were deceived and threatened. They participated in the persecution directly or indirectly and committed crimes against Dafa. Through practitioners' untiring efforts to explain the facts about Falun Dafa, many people have understood the truth and quit the Chinese Communist Party. Many people have been saved and know the preciousness of Dafa. They, themselves, are are now letting others know the facts. After learning the truth, many people with predestined relationships have made rational choices, picked up the book Zhuan Falun, and started to cultivate.

One practitioner has been telling others the facts about Falun Dafa for years. He always plays DVDs that explain the facts about Falun Gong and programs from New Tang Dynasty Television on his TV. Some workers from out of the town often went to watch his TV after work and learned the truth. Before they went back to their homes, they asked the practitioner for some materials and DVDs about Falun Dafa. They took that information to their families and relatives and spread the facts. One evening before the wheat harvest last year, someone arrived at this practitioner's home in a hurry, with sweat pouring down the face. The person asked for ten DVDs and materials that explain the facts about Falun Dafa. The person said, "The year when that school nearby was undergoing expansion, we came here from out of town to work. We often came to watch your TV. You gave me a copy of the Nine Commentaries on the Communist Party. It has been several years now, and I am here to work again. My workplace is about seven or eight miles from here. We are going home tomorrow. We all like to read things about Falun Dafa. My fellow workers, about a dozen of them, asked me to come here to get some Falun Dafa materials. We want to take them home to read." The practitioner prepared over ten sets of materials and asked that they be shared with families, relatives, and neighbors, so that they, too, could know the truth and choose a wonderful future. The person thanked the practitioner again and again, and left. Seeing how people have changed, we are really pleased. What practitioners have done has been worthwhile. We deeply feel Master's compassionate salvation.

Falun Dafa blesses people. In the following, I would like to share several brief incidents in which people were rewarded after understanding the truth. These are just a few of many such cases.

A Pupil's Stubborn Ailment Disappeared Right After Understanding the Truth

About two years ago, a little boy came into a practitioner's store to buy a toy. He was a very lovely child, but his head kept swinging from side to side, which was really annoying.

The practitioner asked him, "What grade are you in? Why does your head keep moving?"

"I'm in grade three. I have this condition called hyperactivity," responded the boy.

The practitioner said, "How painful it must be. Didn't your mother did not take you to a hospital?"

"She did. We went to many places and spent a lot of money. There's nothing anyone can do."

The pupil said, "Yes, I know them: 'Falun Dafa is good, Truth-Compassion-Forbearance is good.'" The practitioner gave him the card and said, "Remember, silently reading the words on it with sincerity will bring you happiness and security."

"Yes, I will remember," the boy said.

The practitioner then asked, "Do you wear a red scarf in school? Have you heard that a stone with hidden characters was found in Pingtang County, Guizhou Province?"

"I joined the Young Pioneers. What is that stone with hidden characters?"

The practitioner asked the boy to come inside and showed him the TV programs about the stone with the hidden characters and quitting the Communist Party, Youth League, and Young Pioneers.

The pupil asked, "What are those characters on the stone? Chinese ...... Party Dies?"

Watching the video of people doing the Falun Gong exercises, the boy exclaimed, "What are they doing? It looks so great. There are children, too. How come there are foreigners?"

The practitioner told him, "They are practicing Falun Dafa. Falun Dafa has been spread to over one hundred counties. Many foreigners practice Falun Dafa, and the whole world knows that Falun Dafa is good! Only the Chinese Communist Party persecutes Truth-Compassion-Forbearance." After the program ended, he asked the boy if he had understood.

The boy replied, "Yes, I understand. It is not good to wear a red scarf. I will quit the Young Pioneers, be safe, and not suffer misfortune. I'm going home now."

As the practitioner walked the pupil out, he noticed with surprise that boy's head had stopped swinging. "You are not swinging your head anymore. You have recovered! Hurry home and tell your mother. She will be happy."

"Ah, I've really recovered. I will go home quickly and tell my mom that repeating 'Falun Dafa is good' works very well and quitting the Young Pioneer keeps one safe!

Over two years have passed since then. The boy has been growing up healthy.

In Zaoqing County, a practitioner's son and daughter-in-law do not practice Falun Dafa, but deep in their hearts, they know that Falun Dafa is good. They have benefited a lot and have witnessed Dafa's power many times. In June 2009, Cheng Xin (an alias), a relative of this practitioner's daughter-in-law, was found to have two brain tumors. One tumor was small, but the other was as big as a chicken egg. Cheng Xin is the backbone of his family, and his serious condition was of grave concern for all his family members. The practitioner's son and daughter-in-law made a special trip to Beijing to ask for help from their relatives, and got Cheng Xin n Tiantan Hospital in Beijing, a hospital with a famous neurosurgery department.

Cheng Xin had to undergo a thorough exam before the surgery. His doctor was shocked when he examined the resulting films. The brain tumors had disappeared! Checking the films taken before, it was clear that there were two brain tumors. What had happened? His doctor in charge found Cheng Xin and said, "Something incredible has happened. Your brain tumors have disappeared. Why have an operation now? Get ready and go home!"

Cheng Xin's family had suffered so much since his tumors had been discovered that they could not believe the news was true. After a more detailed examination, it was verified that Cheng Xin's brain tumors had indeed disappeared. Cheng Xin called the practitioner's home in great excitement and said, "I did what you asked me to do. It was truly miraculous. I really recovered from brain tumors."

This kind of thing happens every day in China, and there are many reports of similar occurrences on the Minghui website. Because the Chinese Communist Party restricts the Internet, these stories are not widely known. The people in these stories are living among us. Their relatives witnessed these events personally, understood that Falun Dafa is good, and, one after another, they quit the Chinese Community Party, Youth League, and Young Pioneers. I'm recounting these true stories that happened in my area in hopes that more people with predestined relationships will understand the truth sooner, quit the Chinese Communist Party, Youth League, and Young Pioneers sooner, and choose a wonderful future for themselves.