(Clearwisdom.net) President of the Taiwan Falun Dafa Association Chang Ching-Hsi filed a lawsuit against the president and chief editor of United Daily News, Hu Li-Tai and Lo Kuo-Chun, for forging a document and libel. The lawsuit was filed on June 8, 2010, in the Taipei District Prosecutor's Office. 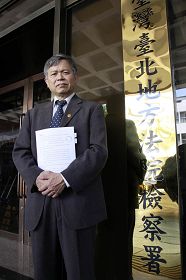 According to Mr. Chang, the United Daily News published a fraudulent announcement on May 11, 2010, in the name of the founder of Falun Dafa, Li Hongzhi, without permission. Mr. Chang said that the newspaper attempted to create distrust and a negative impression of the Association and him personality among the public and Falun Dafa practitioners. The announcement, based on Mr. Chang's description, has damaged the reputation of the practitioners and the founder of Falun Dafa. Mr. Chang said that the announcement also attempted to defame the official website of Falun Dafa, Minghui.net (the Chinese version of Clearwisdom). Besides complaining about the forged document, Mr. Chang also asked the Prosecutor's Office to look into Hu and Lo's criminal responsibility for libel.

Mr. Chang stated that he was surprised to see such a forged announcement that was so blatantly illegal. "It is not hard to understand what Falun Dafa really is, because there are so many practitioners in Taiwan. Apparently, the newspaper is influenced by another party."

Falun Dafa was first taught in Taiwan in 1995. After the persecution started on July 20, 1999, the practice became well-known by the Taiwanese and many embraced it. There are now over one million practitioners in Taiwan.

“Remove the Competitive Mentality and Eliminate the Separations Between Us”