"Your Effort Is Touching" (Photos)

(Clearwisdom.net) Singapore Falun Gong practitioners recently held several events to commemorate the eleventh anniversary of the April 25 Appeal. They wanted people to learn the facts about Falun Gong and help stop the persecution. 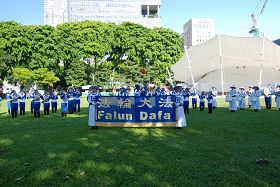 On April 25, 2010, nearly 100 Falun Gong practitioners held a group practice in an east seaside park. The peacefulness of the practice attracted tourists to watch and take photos.

Practitioner Ms. Chen said, "I first learned about Falun Gong because of the April 25 Appeal. But I did not have a good impression of it, because Singapore media referred to or reprinted many reports defaming Falun Gong that had been put out by the Chinese Communist Party (CCP) propaganda machine during the following months. I did not trust the CCP or know Falun Gong until 2000, when I asked a colleague why she was so healthy. Her answer surprised me. She said, 'It's due to practicing Falun Gong.' I started to read Zhuan Falun. This book teaches people to behave well and reveals the truth of the universe. Since then, I have been practicing Falun Gong. The pain in my legs and back disappeared without my even noticing."

Four panels of poster boards were on display. They covered the topics: "Falun Dafa Is Practiced All Over the World," "The CCP Harvests Vital Organs from Living Falun Gong Practitioners," and "Former CCP head and top officials sued all over the world for their crimes of genocide and torture and crimes against humanity."

After the moderator's opening remarks, the Divine Land Band and waist drum team performed, and practitioners demonstrated the exercises. Many passersby accepted flyers and other informational materials from practitioners. Some paused to ask for more information about Falun Gong, and others had their photos.

A young man working in a building nearby said, "I have seen some events here before, but none as orderly as yours."

A tourist from Spain passed by the venue and took several photos. He asked a practitioner, "What are you doing here?" The practitioner explained to him the benefits of practicing Falun Gong and about the persecution and practitioners' effort to spread the facts. The tourist said, "Your effort is touching!"

The rally lasted for three hours.

“I Was on Fuyou Street Near the Zhongnanhai Compound in Beijing on April 25, 1999 (Map)”