(Clearwisdom.net) In early April 2010, Falun Gong practitioners from Madrid went to the coastal city of Alicante to tell people the facts about Falun Gong. They erected banners in the busiest pedestrian street in the city center, gave out leaflets to passersby, and collected signatures for the petition supporting Falun Gong. 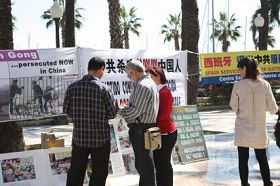 Their leaflet described the on-going brutal persecution of Falun Gong in China by the Chinese Communist regime and the harvesting of organs from living practitioners. Falun Gong is a peaceful cultivation method. Before the persecution, it was practiced by over 100 million people in China and was very popular. It was also awarded many honors by the Chinese government. Falun Gong has spread to over 100 countries and regions around the world. The peaceful and beautiful practice of Falun Gong is well received by people around the world.

After learning the truth, many people signed the petition supporting Falun Gong. A group of young people said to practitioners after they signed, "Keep up your efforts. We all support you!" Many others were already aware of what's going on in China. They said, "You are doing an excellent job. Keep going!" Many people came to read the poster displays exposing the persecution and ask for the leaflet. They also asked practitioners for more details.

Through this activity, local government officials learned the truth about Falun Gong. They expressed their support and also provided lots of help for this activity.

Next day, local practitioners and practitioners from Madrid practiced the five sets of Falun Gong exercises together on the beach.