(Clearwisdom.net) It has been eleven years since the April 25 Appeal. Most practitioners who participated in the appeal are still in China, but some have made it to various parts of the world. Ms. Li Youjiang, who now lives in Vancouver, British Columbia, is one of them. She agreed to conduct an interview with a Clearwisdom correspondent. 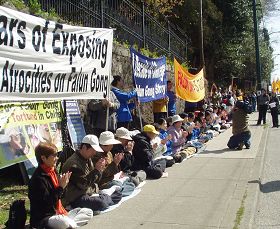 We Just Wanted to Tell the Government: Falun Dafa is Good

Ms. Li Youjiang, originally from Beijing, currently lives in Vancouver. She remembers what happened on April 25, 1999 vividly. She said, "We had a very simple thought: to tell the government the truth, that we benefited from this practice, that Falun Dafa is good."

On the morning of April 25, 1999, they did group exercises in the early morning. Some fellow practitioners told them afterwards that He Zuoxiu had slandered Falun Gong in a magazine in Tianjin, so practitioners went to the magazine office to point out the falsehoods in He's article. On April 23-24, more than 300 riot police officers beat Falun Gong practitioners, causing several injuries, and arrested 45 of them.

Falun Gong practitioners went to the Tianjin City Police Department to request the release of these practitioners. The police told them, "This is out of our control. You have to go to Beijing to appeal." Therefore, many practitioners from Tianjin went to the Beijing State Appeals Office.

Ms. Li said that they wanted to support their Tianjin fellow practitioners, and some went to the Appeals Office. "I remember we arrived at the Appeals Office at around 9 a.m. Many people had already arrived, but we could not go near the gate located in Fuyou street. The police told us to stay along the opposite side of the street.

"We stayed where the police told us to stay all the time; some did exercises, some read, and some chatted quietly. There were some practitioners walking back and forth to pick up any garbage, including the cigarette butts police officers left on the street.

"The police were very tense at first, but later they saw that we were very peaceful, so they stood there relaxed, smoking, chatting, and some of them even chatted with us

"At around 9 p.m., some fellow practitioners told us that the problems were resolved and we could go home. So, we went back home."

Experiencing the Miracle of Falun Gong

Ms. Li said, "We were very simple minded and thought the government did not know about our true situation. We benefited from this practice and needed to tell the government the facts; this way, they would not do the wrong thing, which would not be good for them either."

Before practicing Falun Gong, Ms. Li had viral myocarditis, glaucoma, kidney disease, arthritis, a spinal bone spur, and ascitis of the left side of her back, among other ailments. She often felt short of breath and weakness in her limbs, passed out, and could not even hold a three-pound bag.

One day in May 1994, Master Li gave a lecture in the Public Security Ministry Hall, and a charitable organization presented an award to Master Li for his donations. Ms. Li Youjiang attended with her sister-in-law, felt it was very beneficial, and learned that Falun Gong is a Buddha Law cultivation system. Truth-Compassion-Forbearance, in particular, resonated with her. She read the book Falun Gong upon returning home and gained a basic understanding of Falun Dafa.

Ms. Li said, "As soon as I did the exercises, I felt heat all over my body, as if an electric current had gone through. In the first few days, our drainage pipe broke. We live on the first floor, and I was very worried that the upper level residents could not walk through the first floor. I did not wait for the plumber to come, and instead went to sweep away the water constantly myself. I was very tired, but suddenly, I heard a loud noise in my spine. Later, the doctor looked at my x-ray, said, 'Wow! Your bone spur has broken down completely.' I have never felt my back ache since.

"Once, during group exercises, a newcomer arrived. I was showing her the movements, and I let her use my ground covering when doing the sitting exercise. Suddenly, my chest felt like it was being shocked. I saw that the area above my heart had what appeared to be three red needle punctures. I never felt chest pain or shortness of breath after that.

"During the Jinan Nine-Day Lecture, Master cleansed my body of my glaucoma and ascitis. They were cured instantly. I used to spend tens of thousands of yuan in medical costs per year, but since 1994, I have not taken a single dose of medication, and my sicknesses are all gone."

From Being Atheist to Believing in Gods

Ms. Li experienced many miracles after cultivating in Falun Gong. On the second day of the Jinan Lecture, her third eye opened. She witnessed scenes from other realms and saw three characters carved on a big stone, "Being from Heaven." When she thought about her friend in Singapore, she could see her through her third eye.

Ms. Li said that in her early cultivating photos, many times Falun emblems would appear; and heads on top of heads appeared in photos of her. She could see beautiful flowers that appeared on the fingertips of Master's lotus palm photo.

Ms. Li sighed and explained that even though she grew up with an atheist's education, these miracles fundamentally changed her mind.

Ms. Li said that Falun Gong is not only about getting rid sicknesses and keeping fit, but more importantly, it is about raising a cultivators' xinxing, which benefits both the individual and society at large. She used to be bad tempered and was especially hard on her husband. Thus, there have been many tests of forbearance since she started cultivating.

Once she went shopping with her husband, and they agreed to meet somewhere. Because he rode the family's bike, she took the bus. She waited for 40 minutes, but he forgot about her while browsing through books in a bookstore. When he finally arrived, she was so mad that she wanted to kick him. But no matter what, she could not raise her feet. She realized that Master was restraining her from doing bad things, and that she should be tolerant.

On July 20, 1999, the terrible persecution began. On January 1, 2001, the police arrested Ms. Li because they found out that she had made banners to clarify the truth. The police detained her, took her to serve an 18-month term of forced labor, and imprisoned her in the Xinan Women's Forced Labor Camp until April 2004.

Ms. Li was brutally beaten, forced to sit for a long time, kicked, deprived of her right to use the toilet, not allowed to shower in the summer for one month, forced to do hard labor, and brainwashed by collaborators.

She suffered high blood pressure of 180 mmhg, but she still had to work from 6 a.m. to 3 a.m. every day. She was only allowed to wash and use the toilet for three to five minutes a day, which was never enough. Her clothes were hardened by sweat, and she slept on the floor.

In that miserable environment, some practitioners were tortured to the point of insanity, and one female practitioner's leg was broken during a beating.

Ms. Li's employer fired her because she practiced Falun Gong. Her mother could not bear seeing the persecution of her daughter and died in 2002. Nonetheless, the persecution could not shake Ms. Li's faith. She still clarifies the truth to people and hopes that more people will see clearly the true nature of the Chinese Communist Party (CCP) and know the facts about Falun Gong.

The CCP's Evil Nature Is Exposed

After enduring the persecution for so long, Ms. Li has clearly understood that the April 25 Appeal was a sacred act of safeguarding Falun Dafa by practitioners. They were exercising their constitutional rights, while the CCP plotted a comprehensive campaign against them.

Many Chinese people, who do not know the truth, often say that the practitioners laid siege to the Zhongnanhai Compound [the seat of government in Beijing] and brought the persecution upon themselves. This "reason" is a CCP fabrication. Ms. Li said, "It was the police from Tianjin that told us to go to Beijing to appeal; it was the police who guided practitioners to stand around the block [close to Zhongnanhai]. Photos show that the CCP had installed cameras at all the nearby intersections.

"Falun Gong promotes Truth-Compassion-Forbearance, and the CCP stands against those principles. We never attacked Zhongnanhai or even came close to doing so, and responsibility for the brutal persecution lies squarely at the feet of the CCP."