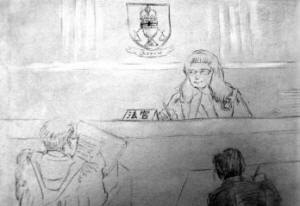 A sketch of a scene in the Ontario Superior Court Monday as the judge heard arguments to allow a Canadian civil case to proceed against Chinese officials for redress against torture.

The Ontario Superior Court heard arguments Monday to allow a Canadian civil case to proceed against Chinese officials for redress against torture.

"This has never been decided by a Canadian court before," said lawyer Kate Kempton during the hearing.

Back in 2004, six Falun Gong practitioners--a Canadian citizen and five Ontario residents--filed a $20-million lawsuit against former Chinese leader Jiang Zemin and four other high-ranking Chinese Communist Party (CCP) officials for torture. The Chinese regime has not acknowledged the lawsuit, but a group called the All China Lawyers Association (ACLA) has intervened on the defendants' side, claiming that the officials hold immunity.

Lawyers for the plaintiffs are arguing that torture "cannot act in the public capacity," and therefore state officials who torture are not entitled to the immunity provided in Canada's State Immunity Act.

Matt Eisenbrandt of the Canadian Center for International Justice (CCIJ), an organization that is intervening on the plaintiffs' side and which follows the legal cases of torture victims, spoke with reporters following the day's hearings.

"People who are victims of torture should be able to go into court and should be able to get justice for what happened to them. Just applying a blanket immunity simply doesn't make sense as a legal matter, and also is not putting Canada on the side of the people it should be protecting," he said.

David Matas, a lawyer representing the plaintiffs, gave details to the court of the persecution and torture of those who had filed the lawsuit. Forced labour, electric shocks, interrogation, beatings, and forced brainwashing were among the claims. Matas is co-author of Bloody Harvest, a book detailing allegations of large-scale forced harvesting of live Falun Gong practitioners' organs for profit by the Chinese regime.

Falun Gong is a Chinese qigong practice with a spiritual foundation that grew in popularity in the 1990s. Jiang Zemin launched a campaign of persecution against the group 11 years ago after he claimed the practice was threatening to the CCP. The five defendants of the lawsuit are considered by the Falun Gong to be the main instigators of the widespread torture and hate crimes against them in China.

The lawsuit against the Chinese officials is different from the Bouzari case against the Iranian government in 2000 in that the Bouzari lawsuit was filed against a state government whereas this case is against specific individuals. Ms. Kempton argued that there should be no immunity for state officials when it comes to matters of torture, crimes against humanity, war crimes, and genocide, because the immunity does not apply to the status of the official but rather the act.

Mr. Matas stated before the judge that the the defendants acted as CCP officials rather than as state officials. In particular, Luo Gan, who was responsible for creating the 610 Office--an extra-legal police task force used to suppress Falun Gong--had no state functions at the time of his alleged crimes.

"The notion of state immunity applying to Luo Gan or [Chinese official Wang] Maolin, to me, was far-fetched," said Mr. Matas after the hearings. "With Jiang Zemin and the other two, there was an overlap between the state functions and Party functions, in the sense that in theory they could have used their state functions to suppress the Falun Gong. In reality, they were using their Party functions."

According to the original Statement of Claim, one of the Plaintiffs, Zhang Kunlun, was told by his torturers, "It is Jiang Zemin who instructed us to do this; it is not what we like to do."

The courthouse was buzzing in the morning, with security officers audibly expressing their surprise over the number of people entering. A few dozen Falun Gong practitioners hoped to attend the proceedings, but most waited outside, as the courtroom could fit only a handful of spectators.

Lawyers for the plaintiffs tried to serve the defendants the lawsuit after it was originally filed in November 2004. After trying for one year and failing, in July 2006 the Ontario High Court Judge granted the motion to let the case proceed as default.

But in August 2007, ACLA introduced a motion to intervene. Falun Gong practitioners believe the ACLA motion was backed by the Chinese regime.

After much discussion, the hearing finally got underway with lawyers Ms. Kempton, Mr. Matas, and Mr. Matthew McPherson all speaking on behalf of the plaintiffs. The interveners on both sides are scheduled to speak on Tuesday, and the Judge's decision may follow.

Malcolm Ruby, lawyer for ACLA, chose not to speak with reporters today.

Mr. McPherson used his time in front of the judge to argue that past cases regarding immunity laws are not applicable to this case. He spoke with reporters afterward.

"The plaintiffs' position is, first, the officials in question were Party officials, all of the acts alleged were done in the context of functions of the Party not the government, and second, the fact that they were committing acts of torture means that they couldn't have been acting in a public capacity because in international law, all states condemn torture. State practice has been not to acknowledge acts of torture as acts of state."

Ms. Kempton spent the afternoon elaborating on the five points central to the plaintiffs' argument. Her last point regarded the dynamic nature of law: 40 years ago states had absolute immunity and lawsuits regarding torture were rare. However, this is now moving in the direction of restrictive immunity, as the sovereignty of nations and immunity of individuals are less of a concern now as the ability to address crimes against humanity.