Member of Canadian Parliament: Resolution 605 of the US House of the Representatives Marks a Milestone and Calls for Concrete Action (Photo)

(Clearwisdom.net) Member of Parliament (MP) Borys Wrzesnewskyj, Vice Chairman of Parliamentary Friends of Falun Gong, commented on Resolution 605, recently passed by the US House of Representatives, during an interview. 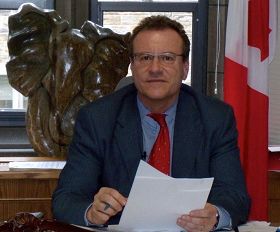 The persecution is a horror that never should have occurred

MP Wrzesnewskyj said, "It is human nature to mark certain milestones and this is a milestone. 10 years, a decade--that is pretty much half a generation and it is unfortunately not a happy milestone. It is a very sad milestone. This resolution is not only the right thing to do, but hopefully will raise awareness. There is a certain fatigue after a while for those who are committed to human rights, working on particular issues. A fatigue can set in and we don't want the Chinese Regime to think that the world has forgotten. This is a horror that never should have occurred and it is high time that the world speak out and this is what this resolution does. It marks the milestone, but also calls for certain concrete action. For instance its point number 2 calls for the abolition of the so-called 610 Office. So there is something that is concretely being targeted by this resolution. So it is marking a milestone and it is showing support, but at the same time it is calling for something quite concrete."

The persecution of Falun Gong is a threat to China

MP Wrzesnewskyj said, "Now there is no internal threat by the practitioners of Falun Gong to the Chinese political regime. It is not a threat. So sometimes states can perceive threats that don't exist and can create threats. And the treatment of Falun Gong is a threat to China. It is not the Falun Gong that is a threat. It is the treatment of the Falun Gong. It is a threat that China may not be able to achieve a sort of status that rightfully China should in the 21st Century. Because people will point out and go, 'Well, my goodness, over a hundred million people, peaceful practitioners of a practice, that involves exercises, a way of conducting oneself in positive ways in one's life, should not be perceived as a threat. Why would a regime come down so hard in a situation of this sort?' It seems to indicate that the political maturity hasn't been arrived at yet in China."

MP Wrzesnewskyj pointed out that the sooner these injustices are addressed, the better, "Those that speak out internationally pose no threat to China whatsoever."

MP Wrzesnewskyj said, "They highlighted a modern horror. And I call it a state cannibalism. A state devouring the most vulnerable amongst them. And you saw the confluence of two things: a paranoia about Falun Gong practitioners, the state coming down hard, wrongfully arresting and imprisoning Falun Gong practitioners; and at the same time this state capitalism would see the potential for an industry, a highly profitable industry in human organs, using Falun Gong prisoners as the source. It is horrific!"

"And that is why what the two Davids [Kilgour and Matas] have done with their report and shining the light on this horrific industry, and why they have done such a service for humanity. We are talking about tens of thousands of individuals, the most vulnerable prisoners who are in prison not for criminal acts, but for their beliefs, in this manner. And the Chinese government had no option but to start to react. So not only have they reported on it, there have been consequences, positive results due to this very difficult work that they have done. And in terms of a planet at peace, where everyone lives in peace and harmony you know they are deserving of that sort of honor. And hopefully the panel that makes the decision will take that into account."

In terms of what governments and the international community can do, MP Wrzesnewskyj said, "I am a firm believer that Canada has shown the diplomatic ability to point out to Chinese authorities how they should steer away from certain conduct and from targeting and victimizing some of their own citizens, and they have no voice. And so when we live in such freedom and prosperity in the West, as fellow human beings, we are compelled to speak out. I certainly hope that Prime Minister Harper will feel compelled to raise this issue in his meetings."

MP Wrzesnewskyj said, "As for the House of Commons and our Parliamentary Friendship Group, I have introduced what used to be C500. It is now because I had to reintroduce in the new session of Parliament this new piece of legislation, C381, about the illegal harvesting and transplantation of organs and body parts. I would be happy if the government would adopt this legislation and introduce it as their own. I have done the hard work and I am more than happy to hand this over to Prime Mister Harper and say, 'Do it. Take the credit for it. The hard work has been done. It is all figured out, it has been used as a template by legislators in other jurisdictions, in Poland in the European Union. Use it and introduce it. It will shine Canada in a very positive light.'"

“Los Angeles: Practitioners Rally for the Rescue of Imprisoned Family Members in front of the Chinese Consulate (Photos)”