(Clearwisdom.net) When Ms. Kang Ruiqi from Changsha City was sent to the Zhuzhou City Baimalong Forced Labor Camp in 2008, she was a healthy woman. One year later, by the time she was released from the labor camp, she was mentally injured.

Although her family didn't dare to seek justice from the authorities, they privately said it was mistreatment in the forced labor camp that caused her to have the mental collapse. 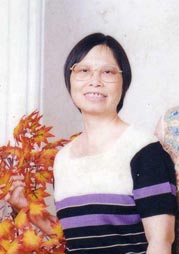 The photo was taken on Kang Ruiqi's 50th birthday ten years ago. After practicing Falun Gong, she recovered from long-term diseases and was full of happiness and hope. 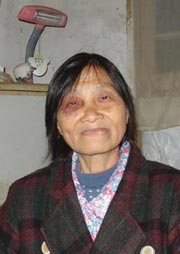 The photo was taken recently. She has changed so much. Although she still smiles in the photo, the changes in her are depressing. What happened to her over the past ten years?

Ms. Kang lives in a small, old apartment in Changsha City. The room is simple and crude, with one wooden bed made of boards covered with a thin bed cover, an old table, a wardrobe 20 years old, an old refrigerator, an old TV, and a DVD player. When she was clear-minded, she always kept the room clean and in order. Her family still remembers that she was always such a neat person and was always clean and tidy in her appearance as well as her home.

Ms. Kang was a manager at a company that sold daily necessities before she retired. She had been weak and sick since she was very young and had to take medicine frequently. She was later diagnosed with blood cancer and gallstones that she nearly died from. She never married because she didn't want to become a burden on others. Although she always suffered and was in pain, she cared for her brothers and sisters and helped pay tuition for her nieces and nephews whenever it was needed.

In April 1996, Ms. Kang started practicing Falun Gong. She finally felt that heaven had blessed her and that she had gained a brand new life. Falun Gong practitioners follow the principles of Truthfulness-Compassion-Forbearance, raise their moral standard, regard fame and self-interest with a light heart, and always think of others first. With the five gentle exercises and the purification and cultivation of one's inner self, practitioners achieve a state of excellent physical as well as mental health. That year, after practicing Falun Gong for several months, she miraculously recovered, and all the symptoms of her illnesses disappeared, including the blood cancer. She truly experienced what it meant to be healthy, without any diseases. Her family witnessed the dramatic changes in her. That year, she was 47 years old.

This happy time lasted only three years, as the Chinese Communist Party (CCP) started persecuting Falun Gong in 1999. Having gone through so many political movements after the regime took over their country, Chinese people all know how ruthlessly the CCP attacks anyone it feels does not serve its purposes. Even though the state-run TV and newspapers slandered Falun Gong, and the local police and community officials came to order her to stop practicing, Kang Ruiqi never stopped. She remained steadfast in her belief. She knew that Falun Dafa was the great Law of the cosmos, and that it had saved her.

Ms. Kang not only kept on practicing but also told others how good Falun Gong was, using her own experiences as an example. She hung a banner with the words "Falun Dafa is Good" written on it. She was ilegally sentenced to four and a half years and detained in Hunan Province Women's Prison from 2001 to 2004. While there, she was tortured. As a result of repeated beatings, all of her teeth were knocked out. A few months after she was released and allowed to return home, she was arrested again for handing out copies of the Nine Commentaries on the Communist Party. She was sentenced to one year of forced labor and taken to Baimalong Forced Labor Camp.

In 2008, before the Beijing Olympic Games, the local resident community staff from the Xibailou Community Office often came to harass her. At 1:00 p.m. on August 6, Ms. Kang was once again taken from her home to Baimlong Forced Labor Camp. The excuse the CCP used to arrest her was simply because the Beijing Olympic Games were about to take place. Those involved in her arrest were Peng Jiale and Peng Xiaomei from the Xibailou Community and others from the Tianxin District 610 Office and the local police station.

One year later, in mid-August 2009, Ms. Kang's family was ordered to take her home because she had schizophrenia. When her family asked how she got such a disease when she was perfectly fine just one year before she was arrested, the officials from Baimalong Forced Labor Camp, Tianxin District 610 Office, the Xipailou Community, and Pozhijie Police Station all tried to evade any responsibility for what had been done to her and refused to give any explanation for the cause of her condition.

A former inmate from Baimalong Forced Labor Camp said she witnessed drug offenders brutally beating Ms. Kang in July 2008. They viciously hit her head against the wall and a metal bar. Another practitioner who had been detained at the same labor camp during the same period confirmed her suffering. During her detention, Ms. Kang was often verbally abused and insulted by the drug offenders. She was deprived of sleep for long periods of time and was not allowed to take a shower during the hot summer for several days at a time.

Ms. Kang still lives in her simple apartment after her release. Sometimes she is clear minded and sometimes not. She often talks to herself, and sometimes others can't understand what she is saying. On cold winter days, she wanders around along the street with only thin outer clothes and plastic shoes. She is barely able to support herself financially. Sometimes her relatives come to see her and bring some prepared food, and sometimes she cooks her own food or buys a lunch box. Because she lost all her teeth during her detention, she can only eat soft food slowly.

On sensitive dates, visitors from the local community go to check whether she is still at home and make sure she is not causing any "trouble."

Taiping Street is a commercial street with many shops. People are busy going about their own business. They hardly notice an old woman who lives in a shabby apartment just a few steps away from the street and would hardly think to inquire about the tragic story behind this older woman.

The CCP is still covering up the facts of the Tiananmen Square massacre in 1989 and has sealed the profiles of those related to the Great Cultural Revolution (1966-1976). The Internet is still tightly monitored and blocked, and Falun Gong practitioners still live under constant threat of illegal detention. At the same time, the CCP propaganda machines continue spreading lies about its harmonious society and living in a flourishing age. All this is intended to make people forget its bloody history, during which millions of Chinese people were murdered and many are still being brutally mistreated. The most targeted are the kindly Falun Gong practitioners who follow the principles of Truthfulness-Compassion-Forbearance.

“Ms. Yang Chunxiu, Who Has Had to Live Away from Home for Years, Arrested Again”