Ms. Zhou Wenfang Dies as a Result of Persecution, Her Son Still Detained in a Forced Labor Camp (Photos)

Ms. Zhou Wenfang was a Falun Gong practitioner from Daxinzhuang Village, Xiantai Township, Mancheng County, Baoding City, Hebei Province. All of her illnesses disappeared after she began practicing Falun Gong. In 2009, unable to endure the Chinese Communist Party's persecution of her and her loved ones, she died of grief. When she was in critical condition, she requested that the forced labor camp in Baoding allow her to see her son one last time. Her request was denied. 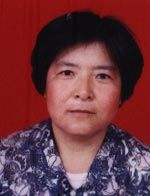 Ms. Zhou suffered from high blood pressure, bone hyperplasia, numbness of the hands and feet, leg pains, stomach disease, etc. prior to practicing Falun Gong. Less than two months after she started practicing Falun Gong, all of her illnesses had disappeared and she looked like a new person with plenty of energy.

During the Winter of 2007, Ms. Zhou's youngest son went to Minghua Computer City, a computer store in Baoding City, to buy some supplies. He was discovered by undercover police officers from the store who found two discs that contained truth-clarification materials in the basket of his motorcycle. He was arrested and sent to the Yuhualu Police Station for interrogation. He was later transferred back to the local police department in Xiantai Town. Police officers confiscated his motorcycle and fined him 2,000 yuan. They threatened him, "If you don't write a guarantee statement to renounce Falun Gong or send in the payment, we will send you to a detention camp."

A few months earlier, before the 2008 Olympic Games, Li Tongxin, the Party Secretary of Daxinzhuang Village, Pan Xiujun, the Director of the Woman's Federation, Chen Hangzhou, the Village Accountant, and deputy secretaries Zhao Jianli and Fan Junrui went to Ms. Zhou's home and harassed them. They forced them write a "guarantee statement" to denounce Falun Gong. Although the family tried to {{clarify the truth}, they wouldn't listen.

On July 13, another four people led by Li Tongxin broke into Ms. Zhou's home again. They were very rude and unreasonable and demanded they turn in their ID cards. They threatened, "We will arrest you if you don't turn them in. A police car from the procurator's office is waiting for you at the entrance. You think about it. We will wait for you in the brigade."

Under pressure from the authorities, they decided to run away from home, and drifted around helplessly. Within days, Ms. Zhou started developing sickness symptoms. Meanwhile, the sunflowers that they had grown in the field and the ones that they had stored at home started to rot.

Even before the Olympic Games, cadres from the county and town started to station themselves in the village. When Ms. Zhou's family was forced into exile, cadres from the village took turns to guard their doorstep 24 hours a day. After they heard of their exile, Ms. Zhou's family members went around to inquire their whereabouts. They went to her village and saw the cadres who promised them that things would be alright if they came home. When Ms. Zhou came home, all she saw was an empty house. The corn, fertilizer, rapeseed, tricycle, pulling cart, corn planter, double-spade plow, wheat planter, and a 200-meter-long irrigation hose had all been stolen. She went to look for the village cadre. He deflected the responsibility to the villagers. Yang Ping, the head of the village, paid her 1,000 yuan. Ms. Zhou refused to take the money. Yang left the money with Ms. Zhou's nephew, Yu Dalong.

Because the village cadre had promised that nothing would happen to them if they came back. Ms. Zhou's husband and two sons came home one after another. Ms. Zhou went to the police station to report the losses. Cai Hongjian, the instructor of the station, told her to go to the Interpol Unit which was located 15 miles from Daxinzhuang Village. She knew that it wouldn't help even if she went there. Helpless and desperate, she decided to ask the villagers to give her a fair say on her grievances.

At 10 p.m. on August 7, Li Zhenxing, Ms. Zhou's oldest son, was stopped by party secretary Fan Shuzheng as he was riding a bike with truth-clarification materials in it. He was arrested and sent to a police station in Xiantai. After a severe beating by police officers, he was sent to the detention camp in Mancheng County. Later, several police officers led by Sergeant Shi Junbao broke into Ms. Zhou's home and ransacked it. They found a copy of the Minghui Weekly and other materials. They arrested Ms. Zhou, her husband and her younger son and sent them to the police station.

They were tortured by the police for two days and two nights. The two elders were detained in the Mancheng Detention Center and their son was sent to the Zhuozhou Brainwashing Center. Ms. Zhou became sick on the eighth day of her detention. She and her husband were released. Even after they were released, cadres from the brigade and the village still took turns monitoring them. Their home phone was tapped by the Mancheng police.

Li Tongxin, the brigade secretary, told Ms. Zhou that her oldest son had already been sent to a forced labor camp for 15 months. He was shocked with four electric batons by the guards from Baoding Forced Labor Camp. He was also tied to a heat pipe for several days. Upon hearing this, Ms. Zhou collapsed. Although she and her husband had requested to see their son in Baoding Forced Labor Camp many times, they had always been refused by the guards because he was not "transformed" and that his family members were Falun Gong practitioners. Sometimes the two elders would shout their son's name outside the labor camp. They had gone there several times and sat for half a day just wanting to see their son. The police threatened to arrest them.

Ms. Zhou's health worsened drastically due to the suffering. She went to a clinic for a checkup and was told she had developed diabetes. She went to Fukang Hospital in Mancheng County for treatment and she fell into a hypoglycemic coma. She was transferred to the First Hospital in Baoding. The hospital discovered that she had expansion in cardiomyopathy, cardiac arrhythmia, frequent premature heartbeats, and high blood pressure. Her condition was very unstable. During her critical condition, she had requested to see her son one last time, but was denied the chance by the Baoding Forced Labor Camp. She was hospitalized three times in the First Hospital of Baoding. Finding no cure, she was taken home and died on the way.

Even though his mother passed away, the Baoding Forced Labor Camp didn't allow Mr. Li to see her one last time. According to the Xiantai Police Station, he had to pay 10,000 yuan if he wanted to see her. In the end, Mr. Li didn't have the chance to see her.

Ms. Zhou's husband hired a lawyer to file a lawsuit against the perpetrators. Just before the trial, his lawyer suddenly received verbal notification from the court in the New District, "No one is allowed to represent Falun Gong-related cases." At that time, he received a document which detailed the terms of detention of his son in the forced labor camp. According to the document, he was detained in the second brigade for 15 months, and the release date was November 7. After going through numerous hardships, he and his family were delighted to come to pick up his son on the scheduled date. When they arrived at the labor camp, the guards ignored them and told them that his son's term was extended by two months, without any reason. Two months later, on January 7, 2010, he went again. The guards told him that the release date was again postponed to January 20. They said the national security brigade and police station were in charge of his case.