(Clearwisdom.net) Ms. Liu Zhimei was admitted to the Chemical Engineering Department of Tsinghua University in 1997 and was expelled in March 2001 for practicing Falun Gong. She was subsequently arrested in Beijing and sentenced to 12 years of incarceration and tortured at the Shandong Province Women's Prison. Right before she left the prison in November 2008, prison officials injected her with a harmful cocktail of narcotics and anti-psychotic drugs. The effect of the drugs began to show on the third day after her returning home. She suffered a sudden mental collapse, and the symptoms became worse and worse. She started talking nonsense and had involuntary body movements, along with memory loss. Though this happened more than a year ago, her condition has not improved.

A Tsinghua alumnus said Ms. Liu Zhimei was a "very innocent and kindhearted girl," outgoing and big-hearted. A practitioner who was acquainted with her said she was modest, yet an independent thinker.

Ms. Liu Zhimei before the persecution

According to the Minghui website, Ms. Liu Zhimei and many other Tsinghua students were suspended from their schooling for practicing Falun Gong. She was expelled and sent back to her home in Shandong Province after the persecution began in 1999. They were coerced to write repentance statements and statements criticizing their own behavior to be used for propaganda purposes. Ms. Liu withstood overwhelming pressure from family and school officials and persisted in her beliefs. She returned to Beijing in early 2000 and joined several other practitioners who were also former Tsinghua students in revealing the facts about Falun Gong to the public. At that time, many practitioners were detained in Daxing County, Beijing. Ms. Liu and others risked their safety to request the release of incarcerated practitioners. 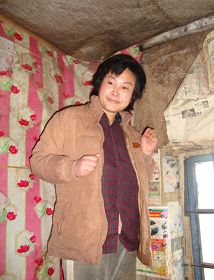 Photo taken in 2010: Ms. Liu Zhimei after suffering a mental collapse from the persecution, runs into a corner of her living quarters with clenched fists whenever someone tries to approach her.

A tile kiln on the village outskirts 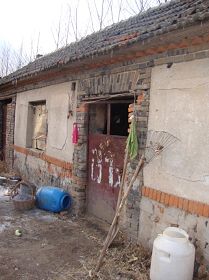 According to reliable sources, Liu Zhimei was pretty and petite when first taken to the prison. After seven years of barbaric abuse and inhuman mistreatment, she is now emaciated. She walks with a limp, unable to properly move her legs. Her body is bloated. Her menses are strangely irregular, coming every 3 to 5 days, with black and ill smelling discharges that stain her clothing. Her legs from thighs to ankles are severely bruised. Her relatives and friends worry that she might have been sexually assaulted in prison.

Her mother was dealt a huge blow when she learned Liu Zhimei was sentenced to 12 years in prison. She became paralyzed in 2007. When she finally saw her in 2008, her cherished daughter had suffered a mental breakdown before her eyes within a few days. Grief-stricken, the mother died three months later at the age of 62.

Ms. Liu Zhimei and her father who is in his 60s now live in an abandoned tile kiln on the village outskirts. The glass-less windows are covered with cardboard to stop the chilling wind. An earthen bed and a wooden bed are the only furniture inside. Torn yellowed newspaper fails to cover large cracks on the walls, and the stench of urine fills the air. The urine-soaked bedding is icy and hard. Ms. Liu sits on it and talks to herself.

She was born in a peasant family in Sanqing Village, Tuanwang Town, Laiyang City, Shandong Province. She was smart since childhood. Her family recalled that she always earned excellent grades. Following an academic exam in 1997, 17-year-old Liu Zhimei's grades were found to be top in all of Shandong Province. She was admitted to the Chemical Engineering Department at Tsinghua University with exempt status, meaning she did not have to take the national college entrance exam.

Arriving at Tsinghua, she not only entered one of China's top universities, but also encountered Falun Dafa. Close to 1,000 faculty and students at Tsinghua then practiced Falun Dafa.

Jiang Zemin and his clique launched the nationwide persecution of Falun Dafa in July 1999. Ms. Liu was in her sophomore year. School officials told her parents to take her home. The university denied her registration in September and later suspended her without explanation or documentation. She persisted in her belief in spite of several arrests and detentions of short duration. The university officially expelled her in March 2001.

She first returned to her hometown and worked in a game hall to make ends meet. She returned to Beijing in early 2000 and joined several other practitioners who were also former Tsinghua students in revealing the facts about Falun Gong to the public.

She was arrested from her temporary apartment in Beijing's Haidian District in May 2001 and was held at several detention centers.

When she was detained at Fengtai Detention Center in Beijing, she suffered brutal torture. A guard put one leg of a chair on her instep and then sit on the chair to crush her foot with his mighty force. The guards also used hard objects to beat her legs. The torture made her limp for over two months.

Several brawny men hung up her to torture her, as one of them threatened, "If you still refuse to tell us [other practitioners' information], I will strip you naked." She was only 20 years old at the time. She cried and pleaded with them, "you are almost the age of my father, and I shall call you uncle, please don't do that to me..."

When she was finally detained at the Detention Center operated by Beijing Police Department Division 7 where she suffered head and chest injuries as well as losing several fingernails from savage torture. During one interrogation the captors blind-folded her and took her to an undisclosed location, where she was locked in a two-meter by one-meter torture chamber for as long as two months. The complete isolation in a narrow space was enough to drive anyone insane. She was only 20 years old.

During the more than one year of transfers among different facilities she remained upbeat and optimistic. She taught inmates poems from Hong Yin and explained Falun Gong's principles - how to be a good person. While others did not have enough personal items, she always shared what she had. Her fortitude and compassion warmed the hearts of people detained.

Haidian District Court officials charged 22-year-old Liu Zhimei with numerous fabricated crimes and sentenced her to 12 years in prison in November 2002. She was taken to Shandong Province Women's Prison in Jinan City and continued to resist brainwashing.

Officials from Tsinghua University including her professors came to the prison and told her she could keep her spot in school as long as she would renounce Falun Gong. They also treated her to dinner at the prison restaurant. Under the huge pressure, she believed them and did as told, and she also once worked as a "helper" to "reform" other practitioners. After that, she put her whole heart to review notes to prepare for school; however, there was no more information about returning to school in the next three years. She finally came to the painful realization that she had been deceived. This came as a huge mental blow and she grew strangely silent.

Then in 2003 she began to exhibit signs of mental abnormality. People often heard her cries escaping from the prison's so-called "education" section, "I am not sick! I don't want any shots, I don't take drugs!"

Deputy section head Deng Jixia, a woman, in her 40s, took Liu Jimei to the prison clinic almost daily between the end of 2002 and 2008 where inmates injected her three times a day, with 50 ml of drugs each time.

Ms. Liu once recalled the some drugs she received included the powerful anti-psychotics Clozapine, Sulpiride, Sodium Valproate, and others. She once told her experience after receiving an injection, including dry throat, dizziness, blurred vision, hallucinations, and the loss of urinary and bowel movements.

A witness said when Liu Zhimei met with her sister-in-law on March 8, 2005, the family member had to put both hands on her Liu's shoulders, her head drooped and hung to one side. She looked lethargic and could barely stand.

Prison officials called her family between October and November 2005, saying she had fallen ill with symptoms resembling those suffering from brain nerve damage, but they would forbid the family to see her. Her father Liu Zuorui arrived at the prison the following day and demanded medical parole on her behalf but was turned down because she was labelled a "political prisoner."

Prison officials called Liu Zhimei's father in October 2008 and told him to pick her up on November 13. He went to prison and took her home at 2:00 pm on November 13, 2008. Ms. Liu told her father that she went through a physical exam three days before her release and was told she had a hole in a molar and needed an injection, supposedly costing 600 Yuan, but the prison gave it to her for free.

She behaved normally during the first two days home. Her father took her to visit relatives who were excited to see her free. On the third day, however, she started to exhibit abnormal mental behaviors that got worse each successive day. She grew anxious and said things that no one could understand. She constantly waved her arms in the air as if she was running. She didn't sleep all night or sometime only slept two hours in one day. She quickly lost her memory and did not know her age. Her words were out of order; she often repeated the same thing three times. She drank a large amount of water daily (six to seven water bottles - about 2 liters each bottle). She would urinate on the bed without knowing it. She slept on the urine-soaked bed without feeling.

The relatives and friends believed it's the effect of the drugs administered prior to her release. They looked at her teeth and did not find any hole as by prison authorities had claimed and believed that the officials simply lied, to create an excuse to poison her.

Her left middle finger is deformed. The second knuckle is enlarged and cannot straighten [see photo below]. A medical professional stated that it might be caused by the effect of the long-term injection of harmful and unnecessary drugs. 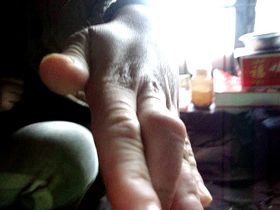 Photo taken in 2010: The knuckle on the middle finger on her left hand is enlarged and deformed and cannot be straightened

One day Ms. Liu Zhimei who couldn't even recall her name wrote the words "Tsinghua University" on the wall. [see photo below].

Liu Zhimei wrote the words "Tsinghua University" on the wall

This beautiful and intelligent young woman was once the object of envy of many people when she was admitted "exempt from national exam" to the elite Tsinghua University from the remote countryside in Shandong Province. She withstood unimaginable pressure after being illegally expelled from school. Who knows what kind of savage torture and brainwashing she was subjected to while detained at the detention center in Beijing and Shandong Province Women's Prison? Undoubtedly, she went through gut-wrenching emotional and physical struggles from betraying her conscience and giving up her belief as she longed to return to school but was downright deceived. How much crime were the prison authorities trying to cover up by injecting her with harmful drugs prior to her release?

She can not tell us what exactly had happened to her in prison, as she has lost her memory. This is precisely what the authorities want--silence her to avoid righteous punishment.

Please tell her story to your friends and family, so all kind-hearted people can see the atrocious nature of this persecution and together, we can end it.