Hanover, Germany: "This persecution is more than just a crime" (Photos)

(Clearwisdom.net) In the busy Christmas season, with people busy shopping for gifts, a white tent was erected in downtown Hanover, Germany. Here, Falun Dafa practitioners held an information day, raising awareness of the persecution in China. The exercise music for the sitting meditation flowed gently from a music player as practitioners demonstrated the easy to learn exercises of Falun Gong. Other practitioners were busy handing out flyers with the latest news and facts about the persecution to interested passersby.

Since summer this year, practitioners have held a similar activity once a month in Hanover. The most recent activity was held November 20.

Among those who walked up to the booth was a venerable 85 year old woman. 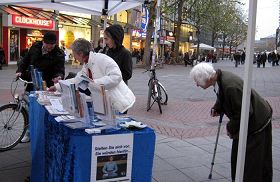 When she finished reading all the display boards and truth clarification material, she couldn't help crying out: "This is the same as the Third Reich (referring to Nazi Germany)." Afterwards she used her quivering hand to sign a petition calling for an end to the persecution. 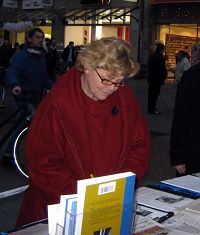 Pedestrians passing by sign their names on the petition demanding an end to organ harvesting atrocities in China.

Facing the reality of how peaceful people in China have become victims of inhuman persecution, many people were shocked, including a 40-year-old Polish man who had lived in Germany for 21 years.

Similar to many people, he didn't hesitate to sign his name on the petition. After this, he sat on a bench in the park, and started to read carefully the leaflet about how Falun Gong practitioners' organs are harvested whilst they are still alive in China's labor camps. He later returned to the information table with tears in his eyes and said, "This is simply unbelievable. This persecution is more than just a "crime"! This simply exceeds wrongness by far. If it really is like this, what can we do about it?"

The practitioner explained to him that first of all the most important point is to affirm one's position correctly, and to oppose this persecution. This had already been done by him signing his name on the petition. The practitioner also emphasized, "We believe, this is just the problem of a certain period of time, and all will be exposed, at which time everyone will stand up to stop this persecution."