(Clearwisdom.net) At 4:00 p.m. on December 13, 2010, as soon as Ji Lin, the deputy mayor of Beijing arrived at Taoyuan Airport in Taiwan, he was informed in person by Falun Gong practitioners that he had been sued two hours earlier. Ji Lin has been involved in the persecution of Falun Gong practitioners throughout the past several years. Even though on December 7 the Taiwanese Legislative Committee had passed a resolution against the entry of Chinese Communist Party (CCP) officials who seriously violate human rights, the Immigration Department had not withdrawn Ji's entry permit in time. However, the accusations against Ji Lin for his serious crimes cannot be blocked in Taiwan. His crimes of persecuting Falun Gong practitioners will be fully exposed and the Taiwan High Prosecutors Office can take judicial action against him. 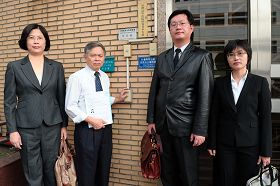 In order to avoid being handed a copy of the Falun Gong practitioners' lawsuit in person, Ji Lin planned his trip very carefully. He did not take his originally scheduled flight, but instead took another flight so that he would arrive in Taiwan at a different time. In order to quickly and easily exit the airport he canceled the traditional welcoming ceremony usually given to visiting CCP officials. Instead he stayed in the customs area until 4:00 p.m. and then left in a hurry.

Ji Lin was so frightened to meet Falun Gong practitioners that he mistakenly went to the place where the public usually boards buses. After he left, an airport security guard came and asked the practitioners, "Was Ji Lin finally served the copy of his lawsuit?"

Before Ji Lin arrived in Taiwan, he was sued for genocide and violations of The International Covenant on Civil and Political Rights. After Xu Guangchun, Huang Huahua, Zhao Yongzheng, Wang Zuoan and Yang Song, he is the sixth CCP official to be sued by Falun Gong practitioners in recent years in Taiwan. 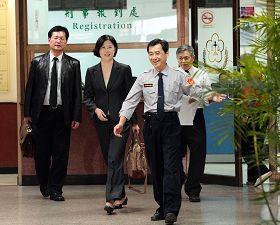 At 2:40 p.m. on December 13, 2010, accompanied by three human rights lawyers, Taiwan Falun Dafa Association president Mr. Chang Ching-Hsi explained to a procurator the crimes Ji Lin has committed as the head of Beijing Political and Judiciary Committee and Deputy Mayor of Beijing. During the Beijing Olympic games, Ji Lin was one of the high-ranking officials who had been involved in planning and leading the persecution against Falun Gong practitioners. Many practitioners were illegally arrested and tortured during the time leading up to the Beijing Olympic games and while they were held. Mr. Chang demanded that Ji Lin should be arrested upon his entry to Taiwan.

Mr. Chang stressed that in Spain, Jiang Zemin and other high-ranking CCP officials have been accused for their violation of human rights. The judicial system in Taiwan should also take responsibility and investigate these criminals. The human rights lawyer explained to the procurator about the lawsuits brought against 34 CCP officials all over the world. On the World Organization to Investigate the Persecution of Falun Gong (WOIPFG) website, Ji Lin is one of the key local officials in Beijing who participated in the persecution. In recent years, Ji Lin spared no effort to carry out the persecution and the crimes are still going on.

In addition, the human rights lawyers brought up the fact that the Taiwanese Legislative Committee has passed a resolution to deny the entry of CCP officials who seriously violate human rights, but the Immigration Department didn't withdraw Ji Lin's entry permit in time. They hope the judicial system in Taiwan will quickly proceed so that justice can be served to these criminals.

Human rights lawyer Ms. Zhu Wanqi expressed her disappointment that the government didn't revoke Ji's entry as required by the resolution. She also discussed what they asked of the government: "We hope the Taiwan mainland committee, Immigration department, Legal department and other local governments publish online the names of the CCP officials who have already applied and those who will apply to come to Taiwan in the future. We should let the public, the Falun Gong group, Taiwanese businessmen's association, Chinese democratic groups, Tibetans, Uighurs and all the other people who have been persecuted by the CCP investigate and determine whether those CCP officials who apply to come to Taiwan have committed any human rights crimes. If they have, we shall provide the evidence to the central and other local governments and ask them to execute the resolution that has been passed by the Taiwanese Legislative Committee to deny the entry of these criminals."

Mr. Chang pointed out that the reason why Taiwan has remained independent from mainland China is because its citizens value human rights and democracy. The protection of human rights is one of the most important foundations that enabled Taiwan to become an independent country. In a democratic country, the will of the public decides everything. In regards to the human rights resolution, all the governmental departments should carry it out.

It is known that Ji's entry application was approved by the immigration department on the same day that the resolution was passed. The public is paying great attention to the resolution and how the government acts upon it.

“Bringing the Grace of Falun Dafa to Moscow Retirees (Photos)”