The Facts about Falun Gong: Healing and Fitness Effectiveness as High as 97.9 Percent (Photos)

(Clearwisdom.net) Falun Gong (also called Falun Dafa) is a cultivation way that was introduced to the public by Mr. Li Hongzhi in 1992. Based on the principles of Truthfulness-Compassion-Forbearance, it cultivates both mind and body. Simply put, it uses Truthfulness-Compassion-Forbearance to guide practitioners' daily life, promote their moral character, and simultaneously make their body stronger and healthier through the five sets of exercises. Falun Gong has spread widely since its introduction. The positive effects of its various aspects are remarkable, and the practice is welcomed throughout the world. 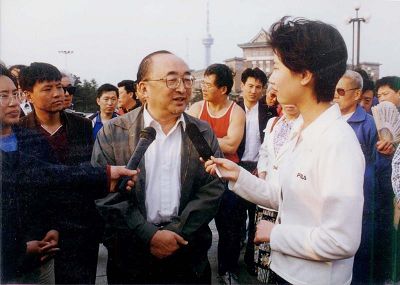 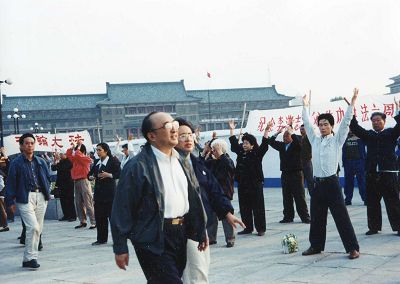 Wu Shaozhu, director of the State Sports Committee, came to Changchun City to investigate the situation of Falun Gong in May 1998.

In order to assist with this investigation, the author, other doctors with different specialties, and professors of medicine comprised an investigation group. Starting in September of 1998, we surveyed 12,553 Falun Gong practitioners living in Guangzhou, Foshan, Zhongshan, Zhaoqing, Shantou, Meizhou, Chaozhou, Jieyang, Qingyuan, and Shaoguan, asking them to provide details about their physical and mental condition.

Among the surveyed practitioners, 27.9 % were male and 72.1% were female; 48.4 % were younger than 50 years of age and 51.6 % were older. A total of 10,475 practitioners reported having more than one illness, accounting for 83.4 % of the total number, but the majority of conditions improved greatly between 2-3 months and 2-3 years of practice. The effectiveness of healing was remarkable, with complete recovery rate of 77.5 %. People with improved but not yet completely recovered health conditions accounted for 20.4 %. Therefore, the total rate of healing and fitness improvement was found to be 97.9 %.

The surveyed practitioners also reported enormous improvement in their psychological and mental state, with 89.4 % reporting that their temperament also improved and their moral standard rose after practicing Falun Gong. Only 129 surveyed people reported no change, accounting for only 1 percent of all surveyed participants. That also included some who were fully healthy before starting the practice.

During the investigation, we also discovered many unusual phenomena among the Falun Gong practitioners. These phenomena were not isolated cases, but quite common.

The superiority of Falun Gong over other qigong and fitness regiments mainly manifested itself in the following aspects:

First, most practitioners experienced changes in their physical and mental condition very rapidly. Some people reported that their sickness symptoms vanished and their whole body felt light in just 3 to 5 days after they finished listening to Mr. Li's lectures or read his books at home. Most people got rid of their sickness completely or significantly improved in several months or in 1 to 2 years.

Among the 12,553 practitioners who completed the survey in 1998, less than one third started practicing Falun Gong before 1996. Those who began to learn the practice in 1997 and 1998 accounted for 72.3 %, and among them, 98 % reported that their illnesses were cured or that they felt healthier. For many types of the reported illnesses, experiencing a cure within such short a period of time is beyond comprehension and could not be achieved by modern medical technology.

Secondly, many practitioners were chronically ill and took many medications before they started to practice Falun Gong. Since they started the practice, however, they reported not needing to take drugs or have injections because of improved physical condition. Among these are some cancer patients who had been prescribed chemotherapy and diabetics who had been informed by their doctor that they would not survive without medical treatment. These phenomena cannot be explained from the perspective of modern medicine.

Thirdly, some practitioners had stubborn or incurable illnesses, or cases that could not be diagnosed by modern medical technology. Some of the patients were also pronounced as terminally ill by hospitals. However, through practicing Falun Gong, many of them miraculously recovered.

We also surveyed 21 cities in Guangdong Province. Each city had a portion of practitioners who had once developed cancer or some other incurable illness, and they didn't think they would ever recover from their condition. After practicing Falun Gong, however, their good health was restored. They then went to the hospital and had re-examinations, upon which the doctors found that the cancer cells vanished and the symptoms of the incurable illness all disappeared.

Finally, not only did many Falun Gong practitioners' illnesses vanish, but many practitioners also appeared younger-looking compared to non-practitioners. The older practitioners reported that their facial wrinkles were reduced as a result of the practice, their hair grew darker, their face regained healthy coloring, and their skin became smoother. Even more difficult to explain was the fact that many elderly women regained their menstrual period, including an 88-year-old woman.

The above phenomena and the reported healing power of Falun Gong cannot be explained with modern science. Why did Falun Gong practitioners' illnesses vanished so easily when modern medicine had so much trouble curing them? For those of us engaged in medical teaching and clinical work, it is truly hard to find the answer from a modern medical perspective. We could only say that this is a unique, superior scientific phenomenon.

Many Chinese have known for a long time that practicing qigong can heal illness, maintain fitness, and prolong life, but they did not know that qigong could also make people regain youthfulness. During the investigation, we discovered that most Falun Gong practitioners appeared younger, and this was most obvious among the seniors.

In brief, these unusual phenomena seen among Falun Gong practitioners have far surpassed what can be explained by modern medicine. Falun Gong is worth serious consideration and discussion in our medical and scientific communities. Falun Gong has a very positive effect on human health, and provides a brand-new direction for science, which could enable civilization to progress.

A professor from a military medical university in China provided the original manuscript for this article.