After a weekend of playing Bach, Mozart, and Beethoven, the finalists at NTDTV's 3rd Chinese International Violin Competition wrapped up the contest with Paganini's Caprices--among the most technically demanding works written for the violin.

In addition, the competition required a piece unlike any other used before for competitions: "Dedu" ("Be Saved") Theme and Variations, a Chinese-influenced piece specially commissioned for the occasion.

Combining highly challenging techniques of the violin with elements of Chinese musical expression, "Dedu" gave contestants an opportunity to walk away with more than just a prize--they also gained a deeper understanding of traditional Chinese culture. 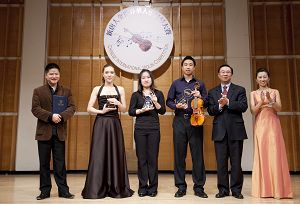 The winners of the Chinese International Violin Competition bronze, silver, and gold prizes: Arianna Warsaw-Fan, Jing Zhang, and Corin Lee. The bronze winner receives $1,000, the silver $3,000, and the gold wins a handmade violin and $5,000.

The composer of the score, Ms. Ching-ya Mahlen, watched the final round of the competition on Sunday, Oct. 31. She expressed her thoughts upon hearing the contestants perform her work on stage.

"I was really, really touched. There's a story behind 'Dedu.' It's about the Falun Gong practitioners who were persecuted for their beliefs in China, who elevated spiritually through practicing Falun Gong, and who stood up for their beliefs courageously. This story is connected to the music. I composed this piece for NTDTV's competition, in order to introduce this music, and let more people know the story [behind it]." 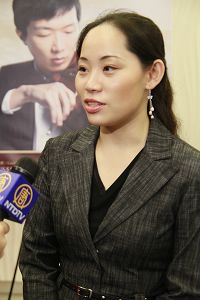 She was moved by the amount of thought and hard work the contestants put into performing the piece and especially appreciated the diversity of their interpretations.

"Because each performer has different backgrounds and experiences in life, through playing with their hearts, they gave the audience different messages," Mahlen said. "While I was listening, I felt like they were telling their own stories."

Corin Lee, from The Juilliard School, played "Dedu" with a quiet and poignant sensibility that at times reminded one of the erhu, a traditional Chinese two-stringed instrument. His vibrato added to the sense of sadness in the music.

Xuan Du from Lisbon, Portugal, opted for a more expressive rendition that included fierce, rapid-fire bowing and majestic notes that filled up the entire auditorium.

Meanwhile, Jing Zhang's (New England Conservatory of Music) lyrical high notes tugged at one's heartstrings, and Arianna Warsaw-Fan (The Juilliard School) played with phenomenal technique reminiscent of virtuoso players. Her confident and assured playing brought out the singing quality in the timbre of the violin.

In the end, it was Lee's unembellished playing that earned him the gold prize. Chia-Chi Lin, one of the judges on the panel, explained: "[In] other competitions, they are looking for mostly virtuoso players ... But I think what's different with our competition is that we are looking for a special kind of character, and it's beauty, and sincere [sic], and honesty. And I think Corin Lee has that quality in him. ... He has that honesty--he plays the way he feels, and comfortably too."

Judge Chen Rutang said: "Everyone can see some very elaborate techniques, such as the chords, as well as the constant transition between high and low notes. They were able to incorporate these techniques into the music, so they were not just displaying technique, but performing music ... they melted into the music, [and] the inner meaning [of the music]. I think this is very precious and also very important. Otherwise, you're just showing off technique." 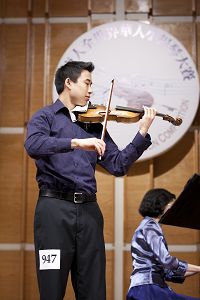 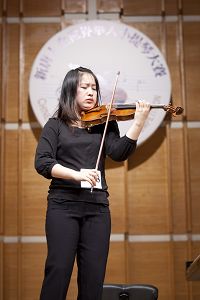 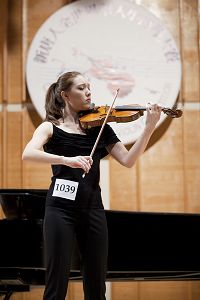 For Lee, he first approached "Dedu" with "the style, the different characters and what the composer was trying to portray" in mind.

Warsaw-Fan listened to some traditional Chinese music "to get a feel for what that's like." For her, "Dedu" was an extremely unique composition. In addition to a beautiful melody, she observed: "The composer took a lot of techniques from Western music that I played a lot more of, so you can see her paying homage to certain other composers."

Warsaw-Fan noted that the virtuosic opening reminded her of Pablo de Sarasate, a Romantic violinist and composer, while the grand hymn in the finale reminded her of Handel's "The Messiah."

The audience at the final round was enraptured by the contestants' playing. Zhou Yanhua, a professional clarinetist, said he admired Xuan Du's playing the most: "Whether it was the inner emotions or his outer expressions, he performed very well ... the emotions embedded in the piece [are] great, and he was able to portray them well."

Many of the contestants are Chinese who grew up outside of China and have not always had the chance to stay in touch with their roots. Lin explained that the competition is aimed to offer just such an opportunity.

"We hope this [competition] will give Chinese violinists around the world a chance to gain a deep understanding of Chinese culture and Chinese cultural expression ... Aside from the technique, there is an added layer of meaning."

By giving contestants the chance to learn about the distinctive features of Chinese music and Chinese playing, NTDTV strives to promote traditional Chinese arts and values.

“Handling Everything with Righteous Thoughts”