South Korea: Practitioners Call for an End to the Persecution of Falun Gong During G20 Summit (Photos)

(Clearwisdom.net) The G20 Summit was held on November 11, 2010 in Seoul, South Korea. During the summit, the Falun Dafa Association of South Korea held a rally in front of the Chinese Embassy in Seoul to condemn the Communist Party's brutal persecution of Falun Gong and call for bringing Jiang Zemin to justice. 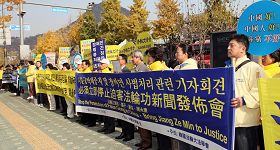 The Falun Dafa Association of South Korea pointed out in a statement, "A National Court in Spain indicted five high-ranking Chinese officials, including the former leader of the Chinese Communist Party (CCP) Jiang Zemin and Luo Gan, former head of the 610 Office, for their active participation in the persecution of Falun Gong in China. A judge in an Argentinian Federal Court issued arrest warrants for Jiang Zemin and Luo Gan for their role in the persecution of Falun Gong. These lawsuits mean that the global legal system has initiated bringing Jiang and his followers to justice. On March 16, 2010, the US Congress passed Resolution 605, which calls for an immediate end to the campaign to persecute, intimidate, imprison, and torture Falun Gong practitioners in China, by a vote of 412 to 1. These developments reflect the righteous intent of the international community."

On July 20 of this year, the Falun Dafa Association of South Korea initiated the collection of one million signatures calling for an end to the persecution of Falun Gong. So far, including online signatures, 123,670 people have signed the petition to support Falun Gong.