(Clearwisdom.net) From South Korea to Canada, no matter where Ms. Tao Qiong moves, she is always surrounded by a group of children who attend the "Minghui School" at her home. These children study the Fa and do the Falun Gong exercises, learn about traditional Chinese culture, and play and have fun together. They have become a group of happy young Falun Dafa practitioners. 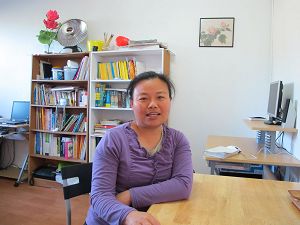 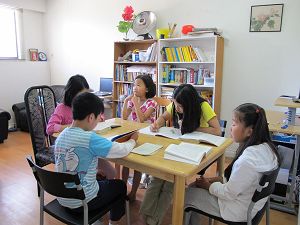 I feel it is my responsibility to look after children

In 2000, Ms. Tao Qiong's husband left China and went to South Korea to study as a postdoctoral candidate. Ms. Tao, who had been illegally detained twice for practicing Falun Gong, and their three-year-old daughter went along with him. The entire family immigrated to Canada in 2008 and settled down in Vancouver. Since then, Ms. Tao had a thought of educating children using Dafa principles. Practitioners living near and far from Ms. Tao's home all sent their children there. There are usually six to seven children at her home, and more during school vacations.

Ms. Tao said that as a result of being with these children, she has become more pure and broadminded.

Seven-year-old Haohao is smart but naughty. No one could control him when he lost his temper. His mother sent him to Ms. Tao's home this summer. Within only a few days, his mother said that Haohao changed. The biggest change is that he has become thoughtful and reasonable. He knows how to control himself. One day, when it was very hot, he carefully moved an electric fan to make it blow at his father, who was pleasantly surprised. His father said, "Haohao is learning to care about others. It was hard to imagine before."

Haohao's mother expressed her gratitude to Ms. Tao. "I did not know how to educate children before; now I feel that I'm growing up along with my child," she said.

An eight-year-old boy, Dong Yu lives in Langley City, far from Vancouver. He is always reluctant to get up, and more so during school vacations, but if his father says, "Let's go to the Minghui School today," he will immediately get up to get ready. Dong Yu's mother said that he went to the Minghui School three times a week during the summer vacation, and he changed a lot. He can read and recite Zhuan Falun alone at home according to Ms. Tao's assignments. He has become polite, too. He greets others on his own initiative, which he had never done before.

Ten-year-old Zongzong found it hard to concentrate on his studies and was slow in doing things. Ms. Tao was strict with him. Zongzong cried several times at the beginning, but when asked if he still wanted to go to the Minghui School, he said, "Yes." Zongzong can finish studying and reciting the Fa on time now.

Children like Changchang, Chenchen and Xinxin who are growing up overseas are not good at Chinese. Following a period of study at the Minghui School, their Chinese improved.

Be truly considerate of others

Ms. Tao's rented home is not big, and nor is her family affluent. Her husband works in a printing house, and their two daughters study at an elementary school. The entire family lives a simple life.

But Ms. Tao refuses to take tuition fees when the children's parents suggested it. Even more precious is that Ms. Tao's husband works the night shift, and when he returns home in the morning to rest, the door to his room fails to block out the children's vibrant noise. He does not complain at all, but is supportive of Ms. Tao as usual.

When it come to mediating conflicts between children, Ms. Tao does not simply act as a judge. Instead, she looks at the problem from the children's point of view, discusses the matter reasonably, and raises questions for the children. Then she finally gives her own understanding of the matter.

Ms. Tao said that if you truly think of the children, they feel that you are good to them, and they will listen to you.

Improving herself while looking after children

Ms. Tao said, "I asked myself, why I am very patient with other people's children? I can always explain to them something many times until they understand. I won't get angry with them, so why I am impatient with my own children? I realize that I'm very rational with other children. Then I tried to discipline my children as if they were the children of others. Gradually, Taotao became more and more able to discipline herself."

Ms. Tao understands that educating children is actually educating herself, which is closely linked with her own cultivation.