(Clearwisdom.net) Ms. Zhang Liqin was an English teacher at the Yangtuanbao Middle School in Qianan City, Hebei Province. She was ill with a leg condition and was bedridden in 1998, shortly after she gave birth to her son. No major hospital was able to cure her. She then heard that Falun Gong could improve one's health and heal illnesses, and decided to give it a try. Within ten days her leg pain vanished, and she was able to ride a bicycle. 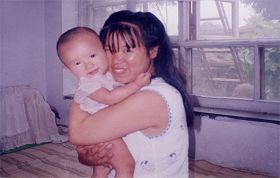 Ms. Zhang Liqin and her son

After the Chinese communist regime started the persecution of Falun Gong, officers from the Domestic Security Division arrested Ms. Zhang while she was teaching her class, and took her to a brainwashing center. The police also ransacked her home. Her husband worked out of town, and her two-year-old son was left alone at home. He was terrified and cried loudly. A good-hearted fellow teacher took the toddler to the home of Ms. Zhang's elder sister, about ten kilometers away.

While Ms. Zhang was in the brainwashing center, her husband visited her, and the couple stayed together at the brainwashing center. One month later, she became pregnant. She kept vomiting and could only drink some water. One day, just as she was about to drink a cup of water, Yang Yulin, the 610 Office head, told her to go upstairs. When she returned, she finished drinking the water. Yan Yulin then smiled maliciously and asked her, "Did the water taste any different?" Ms. Zhang said, "No taste." Yang Yulin continued by saying fiercely, "You think you can get away with being pregnant? No way! I will not let you go!" Then he laughed wildly.

Ms. Zhang had a severe stomachache the following day, and she began to bleed, with the bleeding lasting several days. Even so, the officials ordered her to run in the yard while carrying a bag of sand in front of her. Following that, they ordered her to hand-wash clothing for them in cold water. She later had a miscarriage and lost her child.

By the end of the year, Yang, the 610 Office head, was abusing her more severely and he deprived her of sleep for three days. People were designated to watch her nonstop, with two people per two-hour shift. They slapped her face whenever she tried to take a nap. Ms. Zhang was subjected to such gross abuse for four years.

Within a year after Ms. Zhang Liqin returned to teach school, Domestic Security Division personnel sent people to search her dormitory and found an MP3 player with Falun Gong-related content. They subsequently took her to a detention center, and on the eighth day, officials demanded that she pay 15 days of living expenses, and then released her. Within ten days of her release, Yang Yulin forced school officials to send her to a brainwashing center, subjecting her to additional misery. She was eventually able to escape but decided to flee her home to avoid further persecution. She has had no opportunity to care for her son since.

Ms. Zhang went to Shangzhuang Township in Qianan City on the evening of May 22, 2008, to distribute Falun Gong materials in three villages, including Taoxinzhuang and Dingzhuang. Someone reported her to the police, and she was arrested and tortured for three days. Electric batons were used to shock her, leaving her with blisters all over her body. She was held at the Qianan City Detention Center for eighteen months before being sentenced to seven and a half years in prison on December 3, 2009.