(Clearwisdom.net) On August 1, 2009, Falun Gong practitioners in Germany held an Information Day activity in Augsburg, a city in southern Germany. The theme of the event was "Stop the persecution of Falun Gong, bring an end to the CCP's atrocities." 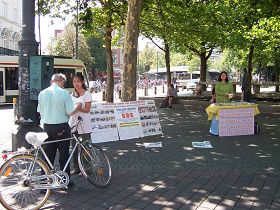 August 8, 2009 is the annual Augsburg Peace Festival in Augsburg. To observe this public holiday, people in Augsburg hold a series of activities to celebrate peace and oppose violence nearly every month. During the "Culture of Peace Festival" held on July 18 in front of the City Hall, the Divine Land Marching Band, composed of Falun Gong practitioners, were invited to participate and were warmly received by the audience and the organizers.

On the same day of Information Day on August 1, many people showed great concern over the persecution of Falun Gong in China.

Magritte learned about the persecution of Falun Gong on the Information Day event held in 2006 by Falun Gong practitioners. She also made great effort to help people around her learn about the inhuman persecution.

Today, she met with Falun Gong practitioners again, and was extremely delighted just as if she saw old friends. She said, "It has been so many years, you are still remaining steadfast, I'm moved. You have done right, so long as the persecution is not stopped, you must keep it up until it is stopped. Great, keep it up! I'll always support you!"

"It's a pity if one does not have faith."

Peter just graduated from the Department of Enterprise Economics and Management at Augsburg University. Being attracted by Falun Gong's peaceful exercises, he stopped and watched with great interest. When he learned that such a peaceful practice is suffering persecution by the CCP, he felt it inconceivable. "Everybody should enjoy the freedom of belief. My faith once gave me strength and courage when I was seriously ill, and enabled me to regain my health. From what I learned and experienced, I think, it's a pity if one does not have faith."

Speaking of the CCP, he thinks it is an autocratic, deformed political system. "There is no real freedom, no human rights, no democracy there." He said, "Even though I have not been to China, I came to know people in DDR -the former Communist East Germany. I could not understand their words and conduct, and their thinking was odd."

The persecution of Falun Gong is horrible

Familie Schloss and her husband happened to pass by the Information Day event. They looked at the displays introducing the wide spread of Falun Dafa around the world. They were touched. When learning that many practitioners are still subjected to brutal persecution, and some practitioners have had their organs harvested while still alive, they were shocked and felt it hard to understand. Why did the CCP launch a sudden suppression after seven years of Falun Gong's wide dissemination in China? Even though there were 100 million practitioners, they believe in Truthfulness-Compassion-Forbearance, how could they threaten the CCP regime?

"It's really hard to understand what kind of thinking it (the CCP) has."