(Clearwisdom.net) Mr. Wu, a Chinese Falun Gong practitioner in Korea, was deported to China on July 1, 2009, due to pressure from the Chinese Communist Party (CCP). His asylum application was rejected for the same reason. On July 2, the Korea Falun Dafa Association held a press conference in front of Gwacheon Government Complex in Seoul and condemned the deportation of Mr Wu by the Ministry of Justice. The association also advised the ministry to correct its mistake and not follow the CCP in its disregard for human rights. A representative of the association handed over a protest letter to the ministry. 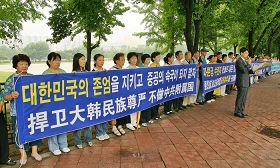 The Korea Falun Dafa Association held a press conference in front of Gwacheon Government Complex in Seoul to condemn the deportation of practitioner Mr. Wu by the Ministry of Justice

Korean practitioner Park Kui pointed out at the press conference, "It is intolerable that Korea would deport a Falun Gong refugee who faces a risk of losing his life in China. The Minister of Justice must be held responsible for this.

The CCP extends the persecution of Falun Gong to Korea

Mr. Wu's friend explained that Mr. Wu came to Korea for industry training. Later, he learned the facts about Falun Gong. Though he knew about the CCP's inhuman persecution of Falun Gong, he still started practicing and following the principles of Truth-Compassion-Forbearance in his daily life.

The friend said that due to the CCP's persecution of Falun Gong, Mr. Wu could not return home. He stayed in Korea and applied for asylum. Unfortunately, Korea rejected his application due to CCP pressure and secretly deported him to China on July 1.

Recently, CCP Politburo Standing Committee member Li Changchun visited Korea. A reporter, on the condition of anonymity, said that Li asked Korea to immediately deport Falun Gong practitioners in Korea. Though the Korean Supreme Court knows that Falun Gong is persecuted in China, the Ministry of Justice started proceedings to reject practitioners' applications of asylum as soon as Li left Korea. The ministry also claimed that those refugees whose applications are turned down by the Supreme Court would be deported.

The Shadow of the CCP behind the Ministry of Justice

Practitioner Mr. Zhao, who is applying for asylum, said in an interview, "The Korean Ministry of Justice deported Mr. Wu secretly. It was so sudden and incredible. I applied for asylum as a Falun Gong practitioner. I know clearly what a practitioner will face after he is deported back to China. I think anyone that knows the nature of the CCP will have no doubt about the consequences."

He emphasized, "I don't think the decision was truly made by the Ministry of Justice of Korea. Behind the ministry must be the shadow of the CCP. For example, one week before the asylum applications of 32 Falun Gong practitioners were rejected by the Supreme Court, CCP's Li visited Korea. After he left, the ministry rejected asylum applications one after another, which indicates that the CCP exerted pressure on the Korean government by using economic temptation or intimidation."

He also said, "A few days before the ministry's rejection of the practitioners' asylum applications, many Chinese people went to the Service Center for Quitting CCP and threatened us, saying, 'The Korean government will rule against you soon. And you will be deported to China.' How did those Chinese people have that information? No doubt the CCP was working behind the scenes."

Mr. Zhao called on the Korean government not to buckle under to the CCP's diplomatic pressure and economic temptation and to defend its independence and follow the United Nations Refugee Convention.

He reiterated, "The lessons of history are profound. The Christians suffered 300 years of persecution, but spread around the globe at the end. The ancient Roman Empire died out. Those that participated in the persecution of Jesus and his disciples received due retribution. The CCP's persecution of Falun Gong will also end in failure. The disintegration of the CCP is imminent. Those involved in the persecution will be punished without mercy. I wish that the Korean government would not do things that will leave cause for regret for the Korean people in future."

A representative of the Falun Dafa Association said in the press conference, "Eleven members of Parliament and 127 local assemblies have signed a petition opposing the deportation of Falun Gong practitioner refugees. We will use every opportunity to explain the facts to each Korean person and stop the CCP's extension of the persecution."