Rally on Capitol Hill in Washington D.C.: "Powerful Truth and a Call for Conscience" (Photos)

(Clearwisdom.net) Falun Gong practitioners and supporters staged a rally in front of Capitol Hill in Washington D.C. on July 16. More than 1000 practitioners, nine U.S. Congressmen, and representatives from more than 10 non-government organizations (NGOs) were in attendance. The rally was in protest of ten years of persecution of Falun Gong, and in recognition of the July 20 ten year anniversary of the beginning of the persecution. Burton Wides, a Senior Counsel, House Judiciary Committee attorney, said this is "powerful truth and a call for conscience."

Burton Wides, a Senior Counsel, House Judiciary Committee attorney, has helped a lot of Falun Gong practitioners, offering pro bono legal counsel. He came to the rally to express his support. He said that the persecution of Falun Gong by the CCP is worse than the persecution of Christians by the Roman emperor Nero. The persecution is not only towards Falun Gong, but also aims to destroy the moral standards and human principles of all people. Mr. Wides said he is willing to help practitioners, as the CCP's behavior violates basic human rights.

Mr. Wides was happy to see so many people assembled at the rally, trying to end the persecution. He said this is "powerful truth and a call for conscience." 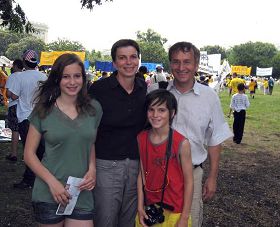 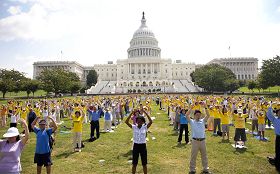 Dr. Larmor and his family are vacationing in Washington D.C. from their home in Germany. They were attracted to the peaceful exercises, watching for a long time. They were shocked when they learned about the persecution.

"They are so peaceful. We can sense that wonderful peacefulness. Not only the meditation is peaceful, but also their attitude and approach are peaceful in resisting the persecution," Dr. Larmor said "I can't understand why the Chinese government persecutes such a peaceful group! They bring no harm to anyone."

Dr. Larmor's wife is a mathematician. She agreed with her husband. "We had the Nazi tragedy in Germany. We are against any persecution. Everybody on the planet should have the basic human rights and freedom of belief."

Dr. and Mrs. Larmor were happy to meet Falun Gong practitioners. They asked for the website about Falun Gong. They said that they would try the meditation themselves.