(Clearwisdom.net) On June 18, 2009, initiated by New York State Assemblyman Phil Boyle, more than 50 members of the Assembly co-signed a letter within 24-hours of signature collection at the New York State Capitol in Albany. The letter calls upon President Obama to urge the Chinese Communist Party (CCP) to stop the persecution of Falun Gong. On the tenth anniversary of the beginning of the brutal persecution of Falun Gong launched by the CCP, the joint letter calls upon President Obama to condemn the CCP's suppressive policy, demand the CCP end this lengthy, horrible persecution, and let Falun Gong practitioners restore their peaceful and calm cultivation practice and lives. The signature collection will continue until Monday.

Phil Boyle, a member of the New York State Assembly representing the 8th Assembly district, believes that "July 20" is an important date, for it marks the beginning of the persecution imposed upon Falun Gong practitioners by the CCP. On the tenth anniversary of "July 20," he initiated a letter to President Obama. The assistant in Assemblyman Phil Boyle's office said that within 24 hours, more than 50 members of the Assembly had signed the letter to show their support. In the past, similar letters had only received about a dozen signatures. Assemblyman Boyle said, "We have over 40 Assemblymen writing a letter to President Obama to make sure that he marks July 20th , the ten-year anniversary of the persecution of Falun Gong by the Chinese Communist Party, and we hope that President Obama takes seriously this issue and makes sure that when he is dealing with the administration in Beijing that they focus on human rights in general and the persecution of Falun Gong specifically." [quote from listening to NTDTV program.http://www.ntdtv.com/xtr/b5/2009/06/21/a307490.html#video]

Last year, after accomplices of the CCP assaulted Falun Gong practitioners in Flushing, New York, it became apparent that the CCP had extended its persecution of Falun Gong to US soil. As an elected Assemblyman, Phil Boyle said, "Many people are unaware that it [persecution]is not just going on in China with Falun Gong, but the persecution has also taken place in New York City. There were assaults and violence against Falun Gong practitioners by anti-Falun Gong mobs. We need to make sure that the president is aware of that, and he knows that in New York City, the law enforcement authorities, are acting on that and we need to crack down on any anti-Falun Gong activities." [quote from listening to NTDTV program.http://www.ntdtv.com/xtr/b5/2009/06/21/a307490.html#video]

As you are aware, July 20, 2009 marks a sad anniversary - the beginning of ten years of continuous persecution of Falun Dafa (Falun Gong) by the government of the People's Republic of China. Before this decade of persecution began, it is estimated that between 70 and one hundred million people practiced the tranquil Falun Gong exercises daily in parks, work places, and houses across China, while peacefully adhering to Falun Dafa's guiding principles of truthfulness, compassion, and tolerance.

To date, there have been over 3,000 confirmed deaths as a result of this violent crackdown by the Chinese Communist Party (CCP). It is feared that the actual number of Falun Gong deaths by torture, malnutrition, exhaustion, neglect in detention, and even organ harvesting in hospitals, may actually have reached into the tens of thousands.

The persecution of Falun Dafa followers by the Chinese Communist regime is not limited to the People's Republic of China. Pro-communist mobs have berated, threatened, and physically attacked Falun Gong adherents in New York City. New York City police officers have had to arrest several members of an anti-Falun Gong mob for attacks against practitioners, with charges ranging from assault to resisting arrest.

Mr. President, we commend you for your leadership in protecting human rights throughout the world. In furtherance of your efforts to foster human rights, we urge you to mark the July 20th anniversary by denouncing the policy of repression by the CCP against Falun Dafa and demanding that Communist Chinese leaders end this long campaign of terror, allowing Falun Dafa adherents to once again practice in peace and tranquility. 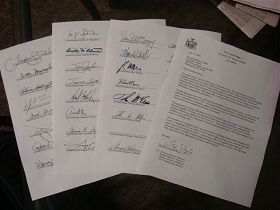 “Ms. Su Zhifeng Dies as a Result of Torture in Jiangsu Province”