(Clearwisdom.net) On June 19, 2009, the head of the Chinese Communist Party (CCP) visited Bratislava, the capital of Slovakia. Falun Gong practitioners held Falun Dafa Information Days on June 18 and 19 to expose the CCP's ten-year-long brutal persecution of Falun Gong and call for an end of the persecution. During the activities, CCP agents attacked the practitioners to stop their efforts to expose the persecution. The incident was covered by several mainstream media outlets in Slovakia. 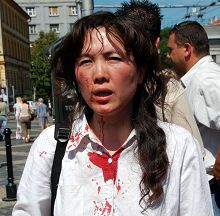 CCP agents pushed Falun Gong practitioner Ms. Su down more than 20 steps. Her head hit the ground and she was injured and bleeding.

On June 18, Falun Gong practitioners held a peaceful event in front of the Slovak Presidential Palace and caught the attention of many reporters and local people. Many people signed petition forms and expressed their support for Falun Gong. Several media outlets reported on the event on the same day.

On June 19, the practitioners held an event beside the palace. Their peaceful exercise demonstration attracted the attention of many passers-by. When a group of primary school students passed by, the teacher said to the practitioners, "We stand on your side."

A little after three o'clock in the afternoon of June 19, CCP agents and others hired by the CCP held a welcome ceremony outside the presidential palace. Some Falun Gong practitioners held banners that read "Falun Dafa is good" and "Quit the CCP and its affiliated organizations for a safe future" to protest the CCP's persecution. CCP agents and their accomplices snatched the practitioners' banners and broke the poles. They also covered the practitioners' banners with their own banners.

Two women Falun Gong practitioners, Ms. Su and Ms. Zheng, unfurled two other banners after their banners were stolen, while shouting "Falun Dafa is good." Three CCP agents forcefully pushed the two practitioners down 20 steps of stairs. Ms. Su rolled down the stairs and her head hit the ground. She was injured and bleeding, her clothing stained red. Her arms were also injured in the fall. Ms. Zheng was not hurt after coming to a stop on the stairs.

The violent attack caught the attention of the Slovak media. Reporters rushed over to take photos and conduct interviews. Many local people condemned the CCP agents. Some reporters took footage of the CCP agents snatching the banners.

Many reporters interviewed the Falun Gong practitioners. Slovak TV, radio stations and Internet news covered the incident. Many who did not know about Falun Gong made inquiries and came to learn the facts.

In a little over an hour, more than ten media outlets reported the news of CCP agents attacking Falun Gong practitioners. That evening, some TV stations interviewed representatives of the Falun Dafa Association.

Local police are conducting further investigations of the incident.