(Clearwisdom.net) The highly acclaimed Shen Yun Performing Arts played to an enthusiastic audience at Seattle's Paramount Theatre in Washington on Friday, May 22.

Watching the New York-based show for the first time, Ms. Wen, president and CEO of a technology company specializing in IT solutions, was awestruck with the performance. "They make the performing arts the most beautiful art form. The stage is like paradise," she said. 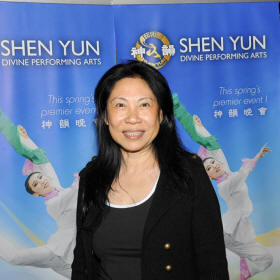 Ms. Wen, president and CEO of a technology company

"The women are so beautiful and represent the most beautiful form of Chinese women with elegance, with subtlety, and with tenderness--with the most elegant form you can see, and it's beautiful."

Ms. Wen also enjoyed the unique backdrops that display breathtaking scenery, be they blossoming landscapes or celestial palaces. "The stage! The background is like a paradise, like heaven."

In presenting classical Chinese dance and music, Shen Yun seeks to revive the true, five-millennia-old artistic traditions of China and present it to audiences around the world. Ms. Wen said Shen Yun presents "ultimate Chinese culture" to the world in "a most beautiful way".

"The ultimate art, the finest of the art of Chinese art, they present in a most beautiful way. It's most expressive, and it's beautiful, absolutely beautiful," said Ms. Wen.

"They present in a fun, elegant way with a subtle depth, which represents the thousands of years of history put in a single performance."

As she watched the show, Ms. Wen came to the realization that life is short, while this art is eternal. "The art they presented has long lasting value, they did a fantastic job. I thought it was wonderful," she said.

"It's just intricate, elegant, it's to the point, it's harmonious, it's synchronized, it has no flaws. The dancers are very beautiful and very, very dynamic. It's fun, lots of fun and lots of humor. It's expressed in a very subtle way, which you don't see in any other performance," she said, adding that the performance has "depth to it."

Ms. Wen was impressed by the orchestra, a unique blend of classical Western and Chinese instruments. "The orchestra is wonderful...It connects beautifully with the movement and it's very innovative in terms of how they compose the music and get it to work with the dancing and it creates an environment, creates a sight and sound," she said.

Dr. Manuelito-Kerkviliet, the first Native American female president of an accredited university outside the tribal college system was amazed after seeing Shen Yun for the first time. "Fascinating, Fascinating!" she exclaimed. 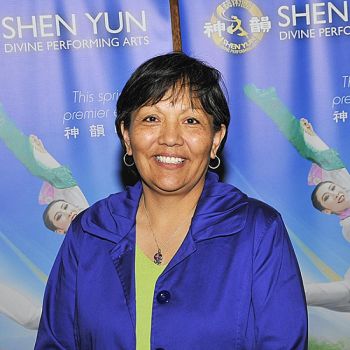 Dr. Manuelito-Kerkviliet said that next year she intends to bring students with her to the show so that they can experience the diverse and rich cultural heritage of China.

As the assistant director of a heritage council, Ms. Kesovjia was especially interested in seeing Shen Yun Performing Arts, a show portraying Chinese traditional culture which she attended at the Paramount Theatre in Seattle on Friday, May 22. 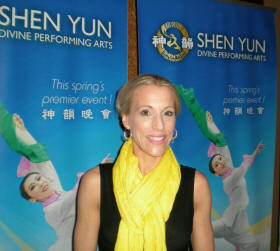 Consisting of hundreds of cultural organizations and individuals, the council is dedicated to preserving the unique mix of cultural traditions that enrich Seattle's Northwest communities.

Thus, when Ms. Kesovjia learned that New York-based Shen Yun is reviving China's traditional cultural heritage which was all but destroyed with the advent of communism to China, she was deeply moved. "It brings tears to my eyes to think about this," she said.

"Our spokesperson was saying that because [the Chinese people] were oppressed they couldn't present their own culture over there, so they are doing it over here. Whether it's to preserve it here or around the world--it's something we have to do."

Ms. Kesovjia enjoyed the unique backdrops that are an integral part of each piece. "That is pretty amazing. It was awesome," she said.

Many of the performances in Shen Yun are grand-scale dances with large numbers of performers moving in perfect synch--something Ms. Kesovjia found impressive. "Often you see 20 women on the stage, and the same number of men--it's just phenomenal to see that.... In one of the pieces, [the dancer] was in the air I think more than he was on the ground. His jumps were amazing."

Ms. Kesovjia concluded by saying she would highly recommend the show to her friends. "Absolutely! It's just exciting to see it on the stage. It's a wonderful opportunity," she said.

“Let Go of the Attachments to Fame, Sentimentality and Material Interests and Truly Be a Fa-rectification Period Dafa Disciple”

“Canada: District of Mission Proclaims May 2009 as Falun Dafa Month”