On May 10, 2009, the Truth-Compassion-Forbearance Art Exhibit began its eleven-day run in Longshan Temple, Lugang, Taiwan. This is an exhibition of artworks created by fifteen artists from around the world who practice Falun Gong. The world-class presentation was well matched with the beautiful scenery at Lugang's Longshan Temple, and attracted many people. Zhou Yixiu, painter and art teacher at Taipei's Jianzhong High School, said, "The essence of art is to uplift people's morals and spirits, and only through the application of compassion and radiance can it benefit society." 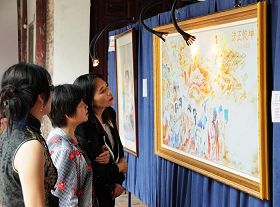 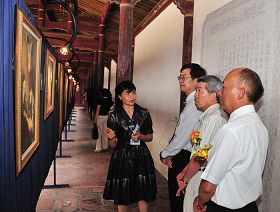 Lugang's Longshan Temple originated from a portion of the Longshan Temple in Jinjiang City, from Quanzhou in China's Fujian Province. The temple's main deity of worship is the Bodhisattva of Compassion. It is one of the most well preserved structures from the Qing Dynasty in Taiwan. The entire temple is further marked by exquisite carvings and is listed as a first class national heritage site.

A representative from the Falun Dafa Association of Taiwan and principal of Changhua's Chenggong Primary School, Ms. Xu Xiuying, said, "The exhibition has been shown on five continents since 2004. It has been well received and highly praised. No other art exhibition has inspired people so deeply and truly moved them to tears. This is because every artwork portrays a moving story, and the perfections of life." 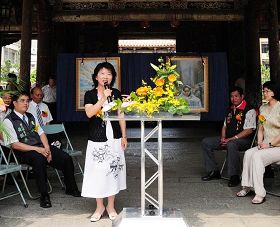 Principal Xu said, "Ten VIPs from Baocheng Corporation saw the Shen Yun Performing Arts show in March this year. One of the pieces in the show, 'The Miraculous Exhibit,' depicted how a young man who injured his arm went to see the Truth-Compassion-Forbearance Art Exhibit. He thought the exhibit was very good and saw a group of people practicing the exercises, so he was drawn in and began to learn the movements. Suddenly, the young man realized his arm was healed. This predestined relationship is very special. The exhibit will bring great fortune to people who visit it." Baocheng Corporation's contribution in presenting the Truth-Compassion-Forbearance Art Exhibit at the Longshan Temple is also a "miraculous exhibit." 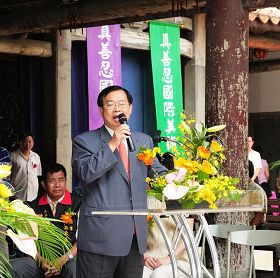 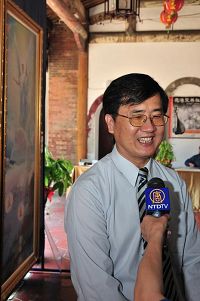 When Ms. Wang Huimei, Mayor of Lukang Town, heard that the exhibit would be held in Lugan's Longshan Temple, she said, "We have to invite the people in our hometown to come to Longshan Temple beginning May 10, to not only admire the heritage, but also see the beautiful art exhibit."

Deputy Chief of Changhua County Mr. Zhang Ruibin said, "The most important aspect of art is to uplift the spirit and calm the heart. In particular, to experience the ability of art to calm the heart in a period of social unrest and economic depression, we are still able to maintain a peaceful mindset. This exhibit is the best healing method." He also said, "Changhua County is now promoting arts education in its communities, and we hope to spread the nourishment of the arts to every fellow countryman. I feel it's a great match to hold this exhibit at the world renowned national heritage site of Longshan Temple, so I want to encourage more people in Changhua County to come and experience and admire this feast of the arts."

Deputy Director of Changhua County's Department of Culture Chen Yunyong added, "We all feel this is worthwhile promoting and recommending to others. Every person comes from the heavens, and the time we spend here is very short. To perform some meaningful deeds in this short time while we live is perhaps also from the guidance of Truth-Compassion-Forbearance."

Painter Zhou Xiuyi was a personal guide for visitors to the exhibit. She said, "Practitioners of cultivation who work in the art sector also have a mission. The essence of art is to uplift people's moral character and spirit. As practitioners of Falun Gong who cultivate Truthfulness-Compassion-Forbearance, we also have this wish to present compassion and radiance in order to bring benefits to society. This is also the spirit that we hold while creating these artworks." 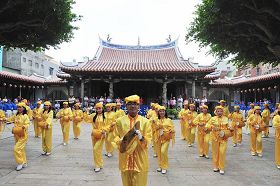 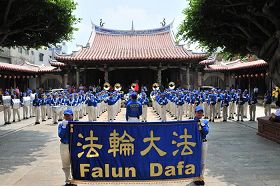 The organizers invited waist drummers and the Divine Land Marching Band, as well as Celestial Maiden Dancers to perform at the opening ceremony. The event was a grand occasion and received much praise from the government and artistic sectors.

“New Practitioner: I Will Cultivate Diligently”