Toronto Commemorates the Tenth Anniversary of the April 25 Appeal (Photos)

(Clearwisdom.net) At noon on April 24, 2009, hundreds of Falun Gong practitioners in Toronto, Canada and their supporters held a rally in front of the Chinese Consulate, to commemorate the "April 25" appeal ten years ago when more than ten thousand Falun Gong practitioners peacefully appealed to the Chinese government for an unrestricted environment in which to practice Falun Gong. Canadian Senator Consiglio DiNino, Michael Craig, President of China Human Rights Net and coordinator of Amnesty International and lawyer Joel Etienne attended the rally.

"More than 3, 200 Falun Gong practitioners have died as a result of the persecution, hundreds and thousands of practitioners are still being detained," Chipkar said."We will continue protesting here against the Chinese Communist Party's persecution of Falun Gong until it is stopped." 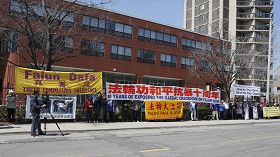 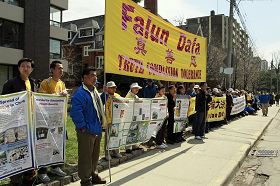 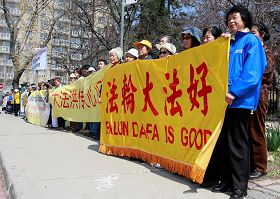 On April 24, 2009, hundreds of Falun Gong practitioners and their supporters held a rally in front of the Chinese Consulate in Toronto to commemorate the 10th anniversary of the April 25th Appeal. 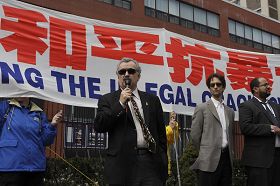 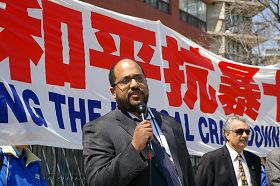 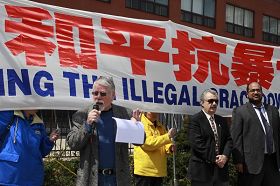 Senator Cosiglio Di Nino remarked that Falun Gong practitioners pursue Truthfulness-Compassion-Forbearance; they bring with them peace and friendliness, and what they request is basic human rights and the freedom that most of people in the world are granted. People do not like violence, and Falun Gong practitioners' peaceful protest is what Canadians appreciate. Senator Di Nino stated that such peaceful appeals are "a method that we should adopt when expressing different opinions."

"I'm here not to criticize China, nor criticize the Chinese people, but urge the Chinese government not to persecute Falun Gong," Di Nino said, "A country is great, not because of its economic success, but because it respects everybody's dignity, and allows people to engage in religious activities in various ways."

He said that lawyers, politicians and policy makers have had contact with Falun Gong practitioners, and Falun Gong's values of Truthfulness-Compassion-Forbearance have affected them. They have also changed, because of the influence of Falun Gong. Mr. Etienne said that they have become better people because of accepting these values.

Michael Craig, President of China Human Rights Net and coordinator of Amnesty International, said that Amnesty International has been tracking the CCP's persecution of Falun Gong over the past ten years, and has made related reports on it. The 2008 report documented that more than a hundred Falun Gong practitioners died as a result of persecution in 2008 in China, and that organ harvesting from living Falun Gong practitioners is still going on.

Zhang Lingyu, Post-doctoral candidate at Qinghua University in China, had heard about the appeal when participating in a group exercise practice in Beijing on the morning of April 25, 1999. After the exercises, he went directly to the appeals office.

He said that everybody stood quietly along the roadside and left a path for people passing by. Nobody left until after 9:00 p.m., upon learning that the central government leaders agreed to handle the issue appropriately.

Mr. Zhang explained, "Because of He Zuoxiu's article that slandered Falun Gong, practitioners had thought that people may misunderstand Falun Gong. Therefore, they wanted to explain the true situation clearly to the state leaders. I think it is a normal appeal according to what the country stipulates, nothing special, so our minds were at peace.

"In witnessing today's rally, we are still peaceful and rational, nothing different from we were ten years ago. Although the CCP violently suppresses Falun Gong, so many practitioners have died as a result of the persecution, and many practitioners are still subjected to the persecution now, we have never changed our way of being peaceful and rational, and our determination that the truth of Falun Gong will prevail in the world has never changed."

Zhang Yumin was retired in 1999. She heard about the appeal on April 24, 1999, and went to the appeals office after 6:00 a.m. the next day. She also said that she had thought that the government may not have known about the situation of Falun Gong and she felt that she needed to go explain it to them.

She said that she did not know the way to the state council appeals office, and only followed the guidance of people from the government. Many police officers came near where she stood, one every three meters, and the police officers stared at the practitioners, looking fierce.

"The police saw that the practitioners were in good order, and we introduced Falun Gong to them. We also told them our purpose for going there. Later, their attitude changed. They told us that they were dispatched from Beijing, and were unclear about what was going on."

Zhang Yumin continued, "I'm very sad thinking of fellow practitioners in China. I wanted to make phone calls to them these days, but I was worried that their phones were tapped, and my phone calls may bring them trouble." Ms. Zhang said that the scenes ten years ago were still vivid in her mind. She did not expect that what the Chinese government agreed to do after the appeal was nothing but deceit.

Huang Yueqiao, who came to Toronto last year from China, said, "Today, I can stand here to freely express my thoughts; but at this time last year, I was still in the country where free speech is forbidden, where speaking the words of my mind may mean imprisonment."

Ms. Huang was illegally arrested four times and detained three times for remaining steadfast in Falun Gong. She spent the last two detentions in Laodongyue Detention Center in Hangzhou City, Zhejiang Province. She was forced to do slave labor, and the guards instigated detainees to maltreat her.

"When the police arrested me the fourth time, I protested with a hunger strike. The guards in the detention center handcuffed me with my arms behind my back for 24 hours, and the handcuffs dug into my flesh. Several days later, my hands and arms swelled three times their normal size and were very painful. Besides that, they tied me against the wall in the corridor, forcing my body and legs into a 90-degree angle, then my arms were lifted upward and handcuffed. My legs were straightened and tied up. I was forced to remain motionless like this for half a day. When I was released from this torture, I almost collapsed, I had difficulty walking, and I was dragged into my cell."

Ms. Huang said that the CCP should immediately stop the persecution, and unconditionally release all illegally detained Falun Gong practitioners. "I call upon all kind and upright people to work together to stop the most evil suppression in human history."