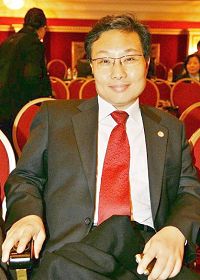 Dr. Choi was enthralled. "Every part of it is excellent. I recall that every part is extremely beautiful, yet the last scene is particularly moving. They descended from the origin of the universe all the way to this lifetime. Linking the two together, everything has a cycle."

"Especially at such a critical time, people search for things that are longer lasting and more fundamental to their lives and values. So Divine Performing Arts presents to us what is genuinely important in life and tells us about Truthfulness-Compassion-Tolerance--these values are predominantly crucial through difficult times. At a time like today, you will have to experience yourself the value of this performance."

"Never in the world, have I seen such grand performance. Yet within the short two hours [of DPA], I for the first time, saw this performance which has gained so many people's acclaim. I am so glad that I could experience it myself."

The show, said to revive traditional Chinese culture, has reminded Dr. Choi of his childhood.

"The entire production is very majestic. It is classic. The backdrops are very beautiful. I felt like I returned to my childhood, because the performance touched some of my particular feelings."

"The performance," he continued, "includes various historical elements, which are familiar to Korean audience members. All the stories connect very well. They also depict how Chinese people faced past enemies. The entire production had a theme, namely how we can find the truth, and let truth become an indispensable part of our lives."

Dr. Choi said that despite the current the economic downturn, DPA still seems to be successful. It is because mankind is seeking the most important things to them in life, and DPA is able to provide that to people.

The Graduate School of International Studies at Ewha was established in March 1997 in response to the need for greater international cooperation. The Korean government awarded Ewha Women's University for establishing a school to train women for careers in the international arena. It is a well-known graduate school in South Korea.

The DPA shows in South Korea run from February 4-8, 2009 at the Universal Arts Center in Seoul.

“Teacher Is by Our Side Every Minute”