Mr. Lu Tong's Daughter Not Allowed to Visit Him at Wuxi Prison (Photo)

(Clearwisdom.net) Mr. Lu Tong, a Falun Gong practitioner from Suzhou City, was sentenced to four years of imprisonment in December 2008. His daughter had planned to hire a lawyer to rescue her father, but the prison authorities tried a variety of ways to prevent her from visiting him. They even transferred Mr. Lu Tong to the Hongze Lake Prison, several hundred miles away from Suzhou City. 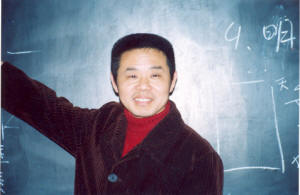 Mr. Lu was arrested by officers from the Caixiang Police Station on July 4, 2008. He was sentenced to four years of imprisonment on December 17, 2008, and was detained at the Wuxi Prison.

Mr. Lu's daughter Ms. Lu Yan requested to visit her father seven times within a month. But she was only allowed to meet with him once and only for five minutes. Because their conversation was related to overseas relatives, who had called and inquired about her father's recent situation and about hiring lawyers for him, the perpetrators disconnected their conversation. They have since not allowed Ms. Lu Yan to visit her father.

Ms. Lu Yan went to the Wuxi Prison to visit her father again on April 1, 2009, but was detained at the Wuhe Police Station for 22 hours. Lu Yan and her uncle (Lu Tong's brother) later continued their attempts to visit Lu Tong. Each time, they waited an entire day in front of the prison gate, but to no avail.

Ms. Lu Yan and her uncle went to the Wuxi Prison on June 23, 2009 and requested to meet with Lu Tong. Xu Linxin, the prison affairs section head, said that because Lu Yan often sat by the prison gate and requested to see her father, they had applied for a transfer at the Provincial Prison Administration Bureau and transferred Lu Tong to the Hongze Lake Prison, which is several hundred miles away from Suzhou.

Lu Yan finally met with her father at the Hongze Lake Prison on July 14, 2009. According to Lu Tong, when he was detained at the Wuxi Prison, he was being watched by 288 inmates. He was often deprived of sleep and not allowed to use the restroom, which caused him to suffer both physically and mentally.

Sun Yun, the Psychological Correction section chief of the Hongze Lake Prison, confiscated the appeal letter given to Lu Tong by a lawyer. He also confiscated the supplies, including pens and notebooks, which Lu Tong's family had sent him.

Next to the prison is a supermarket, where his family bought some food for him. His family found out that the supermarket had not delivered the food they had ordered, but had only randomly delivered some of it.