Taiwanese Lawyer: The Courage Shown by the Spanish Court Courage Gives the World Something to Think About (Photo)

(Clearwisdom.net) CHIAYI, Taiwan- A Spanish National Court Judge indicted five high ranking Chinese officials on charges related to the torture and genocide of Falun Gong practitioners in China. The judges issued summons to the five CCP officials, asking them to explain their genocidal conduct. Should the CCP officials refuse to respond, the court may make a default judgment under which the defendants could face imprisonment for more than 20 years, and may also be held liable to the victims for damages. The defendants have 4-6 weeks to reply. Refusal to reply could result in extradition and an international warrant, which would effectively stop the defendants from traveling to any country that has an extradition treaty with Spain. 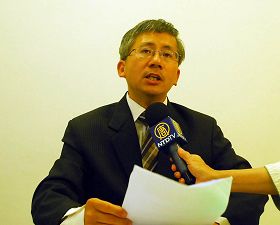 On November 27, human rights lawyer Tseng Chin-Yuan calls on the UN Human Rights Committee (UNHRC) and the International Criminal Court in the Hague, Netherlands, to stand up and support the indictment. He also calls on the Taiwanese government to stand by the Spanish government and to call for the five defendants to be tried in court.

Tseng believes that human rights know no borders. Anyone being persecuted suffers agonizing pain, regardless of his/her race, country and belief. "Anyone who is tortured or whose organs are removed when still alive, and without anesthesia, would suffer excruciating pain." Tseng is also a member of the Coalition to Investigate the Persecution of Falun Gong (CIPFG). He is fully aware of the Kilgour/Matas organ harvesting investigative report "Bloody Harvest," which purports that the Chinese regime orders organ removal from healthy Falun Gong practitioners in China against their will to make illegal profits.

Tseng said, "I wonder why the Spanish Court and not the more powerful countries in EU such as the Germany, France or the British Courts set a precedent? Why not the UNHRC? Why not the most powerful United States courts? Spain's courage gives the world something to think about," said Tseng.

Tseng expects Taiwan to support Spain, since Taiwan is the first democratic republic in Asia. He believes cracking down on genocide is the responsibility of every country worldwide. "Spain is the first runner in the relay, I hope there is a second, third and fourth runner appearing on the horizon soon," Tseng said.

Tseng asks that the Taiwan's President, Premier of Executive Yuan and the Justice Minister will "ask people throughout the world to demand that their governments put the five communist party officials on trial."

Tseng said that as a human rights lawyer, he would greatly enjoy being a witness at the Spanish National Court, be part of the prosecution of the case, or one of the plaintiff's lawyers. "Money and language are not problems. I am sure many other human rights lawyers are as willing to be part of these historical proceedings, just as I am. This will pave the way for justice worldwide. If no one voices support for the weak and one just lingers in an air-conditioned room, enjoying the luxury, how can one fall asleep at night?"