(Clearwisdom.net) Dr. Bui, Vietnamese Community leader in Queensland, Australia was happy to hear of the recent historic decisions made by the Spanish National Court and the Argentine Federal Court. Jiang Zemin, former head of the Chinese Communist Party (CCP) and Luo Gan, former head of CCP's 610 Office and other high-ranking CCP officials were charged with crimes of genocide and torture committed in the persecution of Falun Gong. Dr. Bui hopes that the news will be published widely so that more people will stand up against the persecution of Falun Gong. 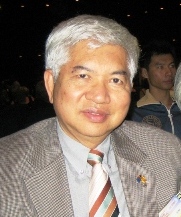 Dr. Bui is a doctor and Vietnamese Community leader in Queensland, Australia. He has shown concern over the persecution of Falun Gong in recent years.

"I must say that I am very happy, very happy and very excited about this news. I think it is time for us to have some sort of success after so many complaints, and so many people in the world have gotten involved in the research to prove that the Chinese Communist Party is doing something bad to the practitioners of Falun Gong, and also other prisoners. I think this is a success, but we have got to work harder, and we need to publish the news and help many more people learn about it."

Dr. Bui finds it intolerable that the CCP harvests organs from living Falun Gong practitioners for lucrative organ transplant surgeries, and it is such atrocities that urged him to speak out against the persecution.

"Really I must say that I was very upset at the beginning, not now but few years ago when I first learned about it, that's why I decided to do something to fight against it, and also when I have a chance I always speak out, to help the people not only in my community but Australian people, the public, and society to learn about it. Two times I spoke to my colleagues in the medical profession about this sort of thing."

When asked if he thought if the CCP's crimes against humanity are a matter that not only Chinese people should be concerned about, Dr. Bui said, "I agree entirely, I think they cannot torture and nobody has the right to steal the organs of the prisoners regardless what their crime is, kill them by taking their organs away and selling them. I don't think anybody in the world has the right to do so. I don't think it is a right thing. I completely object to it."

Dr. Bui also revealed that he had two patients who were able to go to China and obtain kidney transplants with less than three weeks of waiting time. After they came back, the Australian government continued paying their medical expenses for regular check-ups.

"We are the taxpayers in Australia, and we had to pay for someone who went overseas to get it done and come back, without our agreement, knowledge or anything. This is something that we are not happy with. It is not right."

“Texas Congresswoman on Shen Yun: "It's a show that everyone should see" (Photo)”